Delhi Capitals have sealed their place within the IPL 2019 playoff spots with this win over Royal Challengers Bangalore. 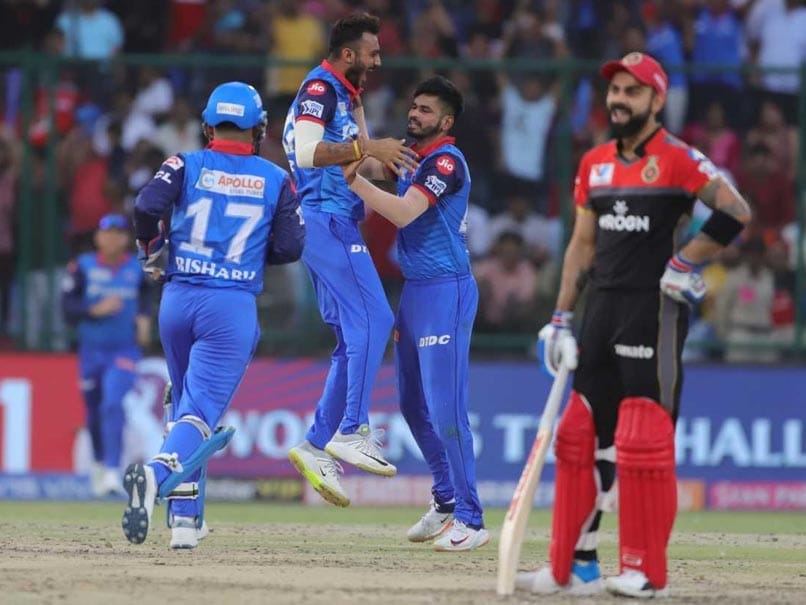 Delhi Capitals (DC)beat Royal Challengers Bangalore (RCB) by 16 runs in their Indian Premier League (IPL) clash at the Feroz Shah Kotla Stadium in New Delhi on Sunday. With this result, DC have climbed to the top of the IPL Points Table for now. Mumbai Indians stand the chance of overtaking them to grab pole position if they win on Sunday as well. However, DC have sealed their playoff spot with this win. For RCB, this defeat spells the end of their chances of completing a fairy tale late-season charge for the top four spots.

Chasing DC's total of 187/5, RCB managed to score 171/7 as the Delhi boys recorded their eighth win to take their tally to 16 points from 12 games. RCB are all but out of the tournament after suffering their eighth defeat of the season.

RCB started the run chase beautifully with Parthiv Patel tearing into the DC attack and skipper Virat Kohli looking happy to play the second fiddle. But just when it looked like RCB would run away with the game, Kagiso Rabada sent back Parthiv (39; 31 balls, 4x7, 6x1), caught brilliantly by Axar Patel. The score read 63/1 after 5.5 overs.

AB de Villiers then joined Kohli and the two looked to settle down, thanks to the brisk start given by Parthiv. But Kohli (23) ended up hitting a half tracker from Axar straight to Sherfane Rutherford at deep mid-wicket. The score read 68/2 in the 8th over.

De Villiers (17) too failed to convert his start as Axar took a brilliant catch at deep mid-wicket off Rutherford. Shivam Dube (24) too was dismissed against the run of play as DC clawed their way back into the game.

With 52 needed off the last four overs, the RCB batsmen just didn't have the firepower to take their team home. While Ishant Sharma gave away just four runs off the 19th over, 9 runs came off the last over bowled by Rabada.

Earlier, winning the toss and batting first, Delhi rode on fifties by Shikhar Dhawan and Shreyas Iyer to post a challenging 187/5 in their 20 overs. The hosts finished on a high, amassing 60 runs in the last five overs.

While Dhawan and Iyer put on 68 runs for the second wicket, Sherfane Rutherford (28*) and Axar Patel (16*) finished well as the RCB bowlers failed to drive home the initiative even after sending back the established batsmen in the middle order cheaply.

Delhi started well even though they lost Prithvi Shaw (18 off 10) as Umesh Yadav had him caught behind by Parthiv Patel. With the score reading 35/1 in the fourth over, skipper Iyer joined Dhawan in the middle.

With Dhawan already looking in fine flow, Iyer looked to settle down quickly as the two tried to make the most of the powerplay overs. They ended the first six overs with the score reading 59/1.

The RCB bowlers looked more than content to play the waiting game rather than forcing the issue, as they waited for the DC batsmen to make a mistake.

But there was no stopping Dhawan who registered his fifth half-century of the season. However, just when it looked like the duo would take the game away, Dhawan was dismissed by Yuzvendra Chahal, caught by Washington Sundar at short fine-leg for a 37-ball 50 (4x5, 6x2). The score read 103/2 in 12.2 overs.

With the stage set for a flourish at the death, Rishabh Pant walked in to join his captain in the middle. But the swashbuckling batsman failed to get going as Chahal caught him plumb in front for seven. Iyer (52; 37 balls, 4x2, 6x3) too perished after reaching his fifty, as Sundar had him caught by RCB skipper Virat Kohli.

The three-over span between the 13th and the 16th over saw Delhi lose the plot as they lost two quick wickets, helping RCB crawl their way back into the game.

Even though Colin Ingram and Rutherford looked to attack the RCB bowlers, the visitors had by now adjusted to the slow and low Kotla track as Navdeep Saini sent back Ingram (11), caught by Sundar. The score read 141/5 in the 17th over.

After that it was the Rutherford and Axar show.

Virat Kohli Kagiso Rabada Cricket
Get the latest updates on IND vs NZ 2021, check out the Schedule and Live Score . Like us on Facebook or follow us on Twitter for more sports updates. You can also download the NDTV Cricket app for Android or iOS.