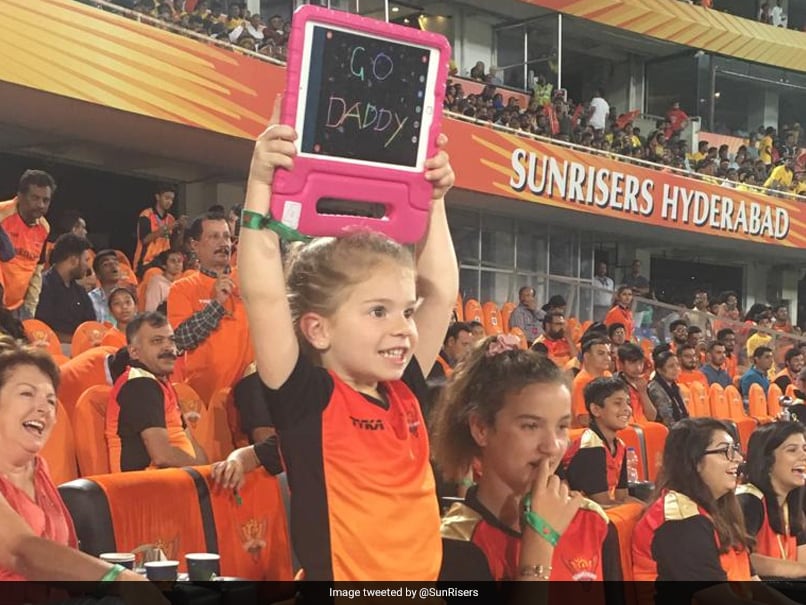 SunRisers Hyderabad (SRH), after three back-to-back defeats, faced table-toppers Chennai Super Kings (CSK) at Hyderabad's Rajiv Gandhi International Cricket Stadium, in a crucial game of IPL 2019. As expected, the ground was full to the capacity and cheering for the home team. But one special fan who stole the limelight was David Warner's daughter, who was seen holding a placard at the start of the game with "Go Daddy" written on it.

This is what brought a smile on Daddy's face

David Warner also didn't disappoint his daughter and smashed 50 runs off just 25 balls when SRH came to bat in the second innings. His powerful knock in the powerplay helped the team achieve the target in the 17th over itself.

After the win, SRH moved up the table to fifth position, thanks to their superior net run-rate. They are tied with the Kolkata Knight Riders (KKR) in the points table who also have four wins and as many losses, in eight games. SRH next face KKR at home on April 21.

Warner received man of the match award for his blistering knock and acknowledged the support he has got from his family and across the globe, especially India.

Speaking at the post-match presentation, he said, "I have two beautiful children, one more on the way, and a beautiful wife and I can't thank them enough. I have fantastic support from over the world and it has been overwhelming here in India."

Rajiv Gandhi International Stadium, Hyderabad IPL 2019 Cricket Sunrisers Hyderabad vs Chennai Super Kings, Match 33
Get the latest updates on T20 World Cup, check out the T20 World Cup Schedule and Live Score . Like us on Facebook or follow us on Twitter for more sports updates. You can also download the NDTV Cricket app for Android or iOS.