After RCB's defeat, Virat Kohli was left fuming, with replays showing that the umpires had missed a big no-ball on the last delivery by Mumbai Indians' Lasith Malinga. 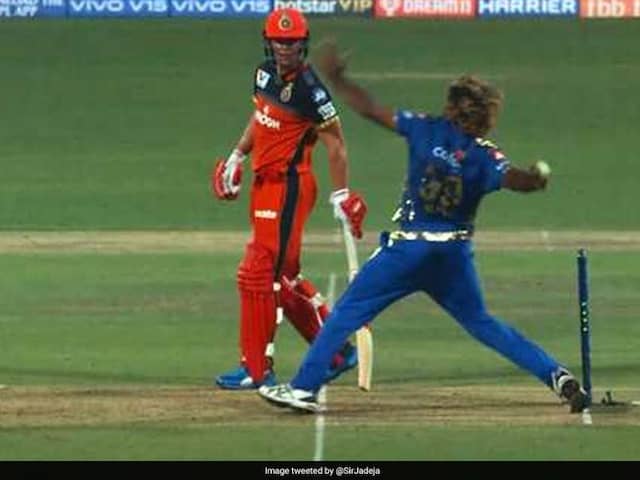 Moments after the last ball in the RCB vs MI match, replays showed Lasith Malinga had overstepped© Twitter

Virat Kohli, speaking minutes after Royal Challengers Bangalore were beaten in a last-ball thriller by Mumbai Indians in controversial circumstances on Thursday, was not holding back any punches when he said, "We are not playing club cricket...The umpires should have their eyes open." His anger, brought about by a replay of the last ball on the giant screen - which showed that Lasith Malinga had significantly overstepped - has been echoed by several past and present cricketers since then.

Hosts Royal Challengers Bangalore (RCB) needed seven runs off the final ball but Shivam Dube failed to get the job done as Mumbai registered a six-run win, their first in IPL 2019. However, after the end of the match, replays showed that Malinga had overstepped by a big margin on the final ball but no call came from umpire S Ravi, a member of ICC's Elite Panel of International Umpires.

Things could have been very different had the umpire noticed the no-ball. If a single had been taken off the last ball and a no-ball called, RCB would have needed to score five runs off the final ball, which would have been a free-hit, with the man on strike AB de Villiers, batting on 71 off 41 balls.

What seems to be the lesson taken from Thursday's incident by most cricketers is that technology should be integrated into officiating more than it is now. Most have pointed to how a quick word from the third umpire, or an equivalent official in charge of monitoring video replays, into the umpire's ear could have prompted a quick review.

This incident will hasten the process of checking the line on every ball bowled. Before the next ball is bowled, the 3rd umpire checks the legality of the previous one. Won't hold up play, there are locked off cameras anyway, will only take a few secs while normal activity is on.

In the world of technology that we live in, a NO BALL like that should NOT happen!

I believe with the technology that's being used in cricket for different things what happened in the #MIvsRCB match highlighted that more should be done.

A quick call from the third umpire on the #noball would have been the right way to go and must be implemented going forward. pic.twitter.com/58lGfHJKJu

Technology should be used much more often in cricket ... so many front foot no-balls missed all the time in all formats and only checked on dismissal. Should be as simple as 3rd umpire telling the umpire through ear piece that a no ball has been bowled.

It would have been better if Shivam Dube was out on the last ball, seems like that is the only way umpires would have checked the #noball

In an era of so much technology and with so much at stake NO BALLS should never ever be missed .... #JustSaying #IPL2019

What did just happened! Such a big error... could have changed the game... #noball #umpires #ridiculous #RCBvMI #VIVOIPL

AB de Villiers IPL 2019 Cricket
Get the latest Cricket news, check out the India cricket schedule, Cricket live score . Like us on Facebook or follow us on Twitter for more sports updates. You can also download the NDTV Cricket app for Android or iOS.