Needing 66 runs off 24 balls, KKR were up against it before Andre Russell came in and smashed an unbeaten 48 to complete the job. 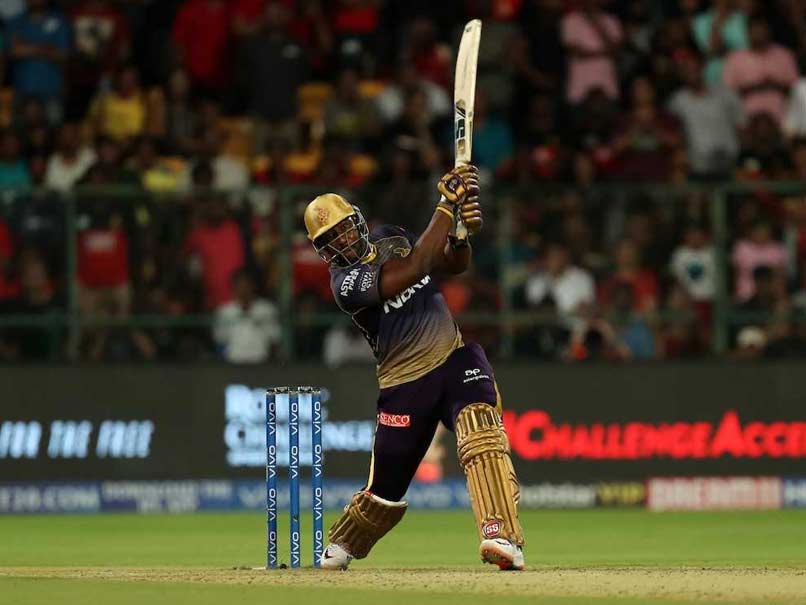 Andre Russell smashed an unbeaten 48 off 13 balls to complete the job for KKR.© BCCI/IPL

Andre Russell scored a blazing knock of 48 runs off just 13 balls as Kolkata Knight Riders crushed Royal Challengers Bangalore by five wickets to climb to the second position in the points table with three wins out of four matches. RCB, on the other hand, suffered their fifth successive loss in the Indian Premier League (IPL) 2019. While Andre Russell lifted the Bengaluru crowd off their feet with seven sixes and a boundary, Shubman Gill scored the winning run as KKR chased down the tough target with five balls to spare.

Needing 66 runs off 24 balls, KKR were up against it before Russell came in and smashed an unbeaten 48 to complete the job.

The result means KKR have now won three out of their four games while RCB are have lost five in a row and are heading towards another sorry season.

KKR were kept alive in the chase through opener Chris Lynn (43 off 31), Robbie Uthappa (33 off 25) and Nitish Rana (37 off 23) before Russell singlehandedly got the job done in the death overs.

Earlier, Kohli and de Villiers hammered the bowlers at will during their entertaining stand. At one stage, it seemed RCB would get close to 250 but KKR did well to pull things back a bit on a batting beauty.

During his sublime knock, Kohli also overtook Suresh Raina to become the leading run-getter in IPL history besides completing 8000 runs in T20 cricket.

The RCB skipper hit some beautiful cover drives early on and his innings comprised nine fours and two sixes. De Villiers too was in his element, smashing five fours and four maximums.

Kohli was finally out in the 18th over off Kuldeep Yadav as he hit the ball straight into the bowler's hands. He was particularly severe on Prasidh Krishna, Lockie Fergusson and Nitesh Rana.

In the last over, Marcus Stoinis belted 18 runs off Prasidh with the help of two boundaries and a six, pushing the total past 200 mark.

Needing a good start desperately, Parthiv Patel and Kohli gave a good start for first time in the tournament, stitching 64 runs for the first wicket in 7.5 overs.

Patel was LBW to Nitesh Rana after scoring 25 off 24 balls with three boundaries to his credit.

Andre Russell Cricket Royal Challengers Bangalore vs Kolkata Knight Riders, Match 17
Get the latest updates on T20 World Cup, check out the T20 World Cup Schedule and Live Score . Like us on Facebook or follow us on Twitter for more sports updates. You can also download the NDTV Cricket app for Android or iOS.