By virtue of this win, MI has jumped to the second spot in the table with 14 points from 11 games. 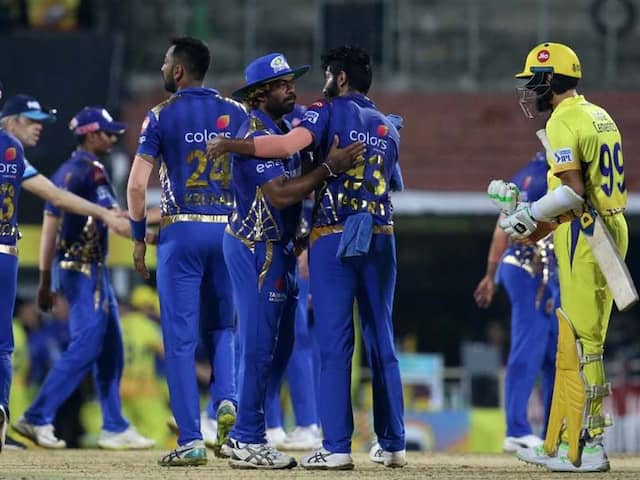 Skipper Rohit Sharma hit his maiden half-century of the season as Mumbai Indians produced an all-round effort to register a convincing 46-run win over defending champions Chennai Super Kings in an IPL match in Chennai on Friday. MI's win Friday ended CSK's winning streak of five games at home this season. The Rohit-led MI, a three-time champion, came up with an all-round performance to silence the Lions at its own den. Rohit top-scored with 67 from 48 balls with the help of six fours and three sixes to help MI post 155 for four on a slow and turning Chepauk surface after being sent into bat. And then MI bowlers led by Sri Lankan Lasith Malinga (4/37) bundled out CSK for 109 in 17.4 overs, the defending champions' lowest total at home.

By virtue of this win, MI has jumped to the second spot in the table with 14 points from 11 games.

Despite the loss, CSK still lead the chart with 16 points from 12 matches.

Defending the total, MI spinners appeared to return the compliment after CSK tweakers had done a superb job in restricting the visiting team's batsmen.

Murali Vijay (38 off 35 balls, 3x4s, 1x6) was the top-scorer for CSK before being caught smartly by Suryakumar Yadav off Bumrah.

Dwayne Bravo (20) and Mitchell Santner (22) were the only other batsmen of the home team to reach double figures.

Shane Watson, who hammered the SRH attack into submission in last Tuesday's game, hit Malinga for two fours but clipped a poor delivery from the Sri Lankan straight into the hands of Rahul Chahar at short fine-leg. He fell for eight in the first over to leave CSK at nine for one.

Skipper Suresh Raina didn't look comfortable during his brief stay, before skying one to Suryakumar off Hardik Pandya for just two.

Ambati Rayudu, who has found runs hard to come by this season, endured another failure. He was castled by Krunal Pandya for a duck with a delivery that came in with the arm as CSK slipped into further trouble.

Kedar Jadhav's poor form continued as he too was castled by Krunal Pandya.

Earlier, Rohit struck his first half-century of the ongoing IPL before CSK bowlers fought back brilliantly to restrict MI to 155 for four.

Rohit top-scored for MI but it was Kiwi left-arm spinner Mitchell Santner who starred with the ball for CSK with brilliant figures of 2 for 13 from his four overs.

Sent in to bat by stand-in captain Raina after Mahendra Singh Dhoni was ruled out of the match due to fever, MI couldn't capitalise on a good start, faltering against some accurate bowling by the home team.

Rohit led from the front with a typically elegant half-century, his first of the season, during which he hit some big sixes and looked in control for the most part. He was holed out to Vijay at long-on off Santner, who bowled a brilliant spell.

Krunal Pandya, pushed up the order in a bid to speed up the scoring rate, fell for just one run, caught by Santner in the deep off Imran Tahir's bowling. West Indies power-hitter Evin Lewis (32 off 30 balls, 3x4s, 1X6) added 75 runs with Rohit for the second wicket and took the attack to the CSK bowlers.

The fast improving Deepak Chahar got the first wicket for CSK in the form of dangerous Quinton de Kock (15 off 9 balls, 1x4, 1x6) with a slower ball.

The South African's attempt to turn the ball to leg-side resulted in a top-edge which was taken by Rayudu, donning the big gloves in place of the indisposed Dhoni.

CSK won the toss and elected to field but were dealt a big blow ahead of the match with captain Dhoni missing out due to fever. Also, Faf du Plessis and Ravindra Jadeja missed out and Santner, Murali Vijay and Dhruv Shrorey came in.

Mumbai Indians IPL 2019 Chennai Super Kings vs Mumbai Indians, Match 44 Cricket
Get the latest Cricket news, check out the India cricket schedule, Cricket live score . Like us on Facebook or follow us on Twitter for more sports updates. You can also download the NDTV Cricket app for Android or iOS.