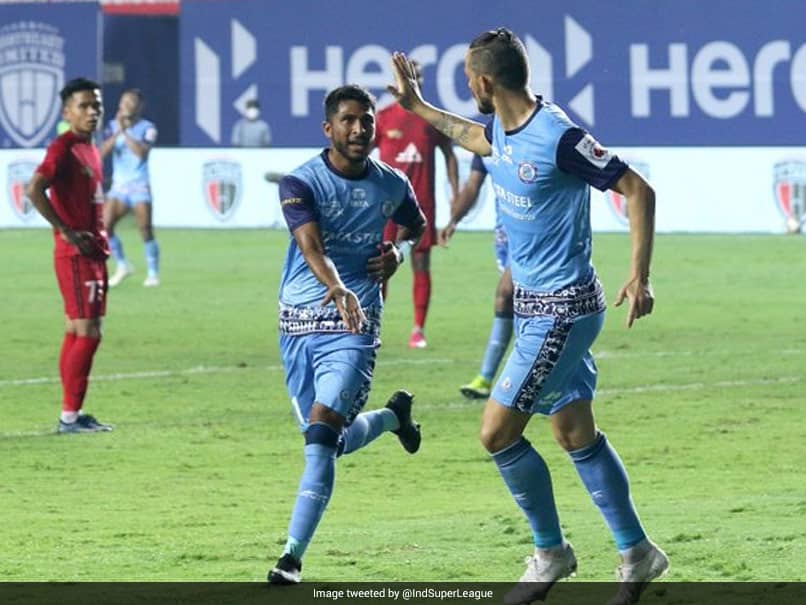 NorthEast United FC slumped to their first defeat in their Indian Super League (ISL) season 7 campaign as they went down 0-1 to Jamshedpur FC at the Tilak Maidan Stadium, on Friday. Aniket Jadhav's strike (53') was the difference between the two sides in what was the 500th game of the ISL. TP Rehenesh also pulled off a terrific penalty save in the second half to keep Jamshedpur's unbeaten streak against NorthEast intact. Kwesi Appiah and Rochharzela were among the two changes made by NorthEast while Jamshedpur made three changes to their line-up. Both sides were unable to break the deadlock in the first half as they managed to cancel out each other's threat. As a result, no shots on target were registered.

NorthEast nearly had the chance to go ahead in the 18th minute when Idrissa Sylla and Appiah combined well at the edge of the box. However, the Ghanaian striker placed his effort wide. Jamshedpur, too, had their chance to grab the lead and it arrived just before the break. Alexander Lima found Stephen Eze in the box with a long ball but the towering defender failed to get his header on target.

NorthEast started the second half with great intensity in pursuit of the opening goal. But a quick counter-attack from Jamshedpur saw them concede first. Isaac Vanmalsanwma and Jackichand Singh linked up well in the opposition box. The latter then swung in a cross for an unmarked Jadhav, who found the back of the net with ease.

But despite conceding first, the Highlanders too had their chance to make amends soon after the hour mark through a penalty. The referee pointed to the spot when Eze brought down Benjamin Lambot in the box. Sylla stepped up to take the spot-kick but Rehenesh dived the right way and produced a fine save to ensure his side remained in the driver's seat.

The Red Miners almost doubled their advantage in the 79th minute but were unlucky. Jackichand received the ball on the right and whipped in a cross that was intended to find Nerijus Valskis but only managed to rattle the woodwork.

Jamshedpur defended with resilience in the dying minutes to ensure they bagged their second win of the season.

Jamshedpur FC Indian Super League Football
Get the latest updates on India vs England Series, India vs England , live score and IPL 2021 Auction . Like us on Facebook or follow us on Twitter for more sports updates. You can also download the NDTV Cricket app for Android or iOS.