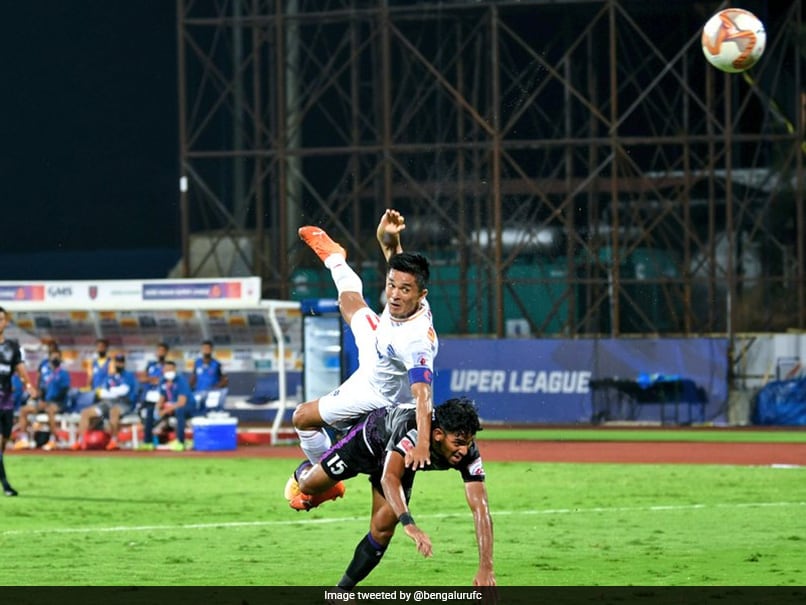 Bengaluru FC piled on further misery on Odisha FC with a 2-1 win in the Indian Super League (ISL) season 7 at GMC Stadium, Bambolim, on Thursday. Cleiton Silva (79') scored the match-winner for Bengaluru after Steven Taylor (71') had canceled out Sunil Chhetri's (38') first-half goal for the Blues, who remained unbeaten in their six matches this season. Also, with this goal, Chhetri became the first Indian player to record 50 goal contributions in the ISL -- 42 goals and 8 assists.

Bengaluru were dominant from the start but were lucky not to fall behind early in the game. Diego Mauricio played a delightful through ball for Manuel Onwu, who managed to get the ball past Gurpreet, but his celebrations were curtailed, as the assistant referee signaled it offside.

Odisha had their moments in the game with Onwu and Jerry Mawihmingthanga creating problems for the Bengaluru defense but failed to test their keeper. They failed to record a single shot on target in the first session.

Bengaluru dominated with 58 percent possession in the first half but despite playing an attacking game, they struggled to get the ball past the Odisha defence line. They had their chance but Ashique Kuruniyan, who had a good sight at goal, shot wide.

Bengaluru finally got the breakthrough in the 38th minute and it was their skipper Chhetri who got the much-needed goal. Dimas Delgado found Harmanjot Khabra who routed the attack from the right and floated a perfect cross into the box. Chhetri leaped higher than Shubham Sarangi and headed home.

The home team came back stronger after the restart in search of an equalizer. They nearly scored when Sarangi bent in a delivery into the box, which fell into Gaurav Bora's path. The defender's shot took a deflection off a Bengaluru player forcing keeper Gurpreet Singh Sandhu to dive at full length to push the ball away. Bengaluru nearly doubled their lead when Erik Paartalu's shot was brilliantly saved by Arshdeep Singh.

At the other end, Odisha made it all square from a set-piece. Skipper Taylor made a fine run to reach the end of Jerry's free-kick and nodded in the equalizer.

But the visitors were determined to regain their lead and were successful in the 79th minute. On receiving a long ball, Udanta Singh headed in for Deshorn Brown in the box. The latter played it into Silva's path and the Brazilian did not miss from close range.

Odisha FC Sunil Chhetri Football
Get the latest updates on ICC Women's Cricket World Cup 2022 and IPL 2022, check out the Schedule , Live Score and IPL Points Table. Like us on Facebook or follow us on Twitter for more sports updates. You can also download the NDTV Cricket app for Android or iOS.