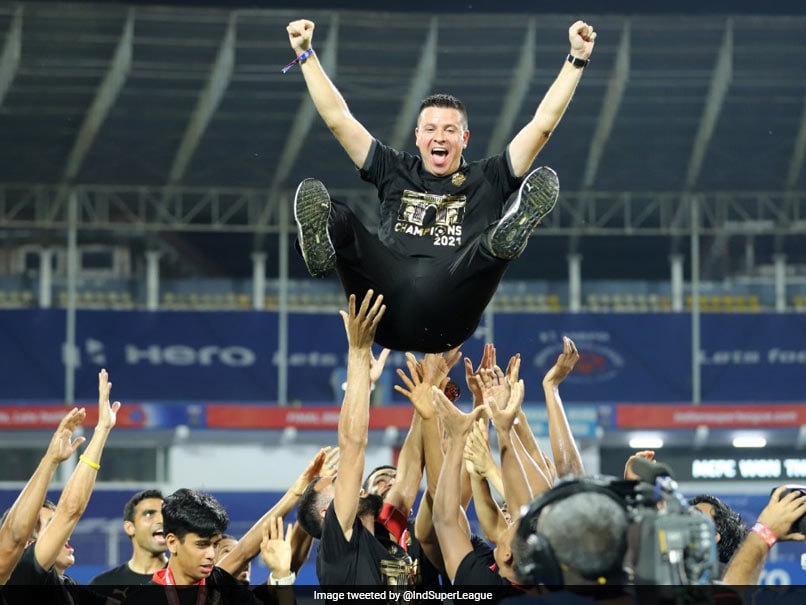 After registering a 2-1 win over ATK Mohun Bagan in the Indian Super League (ISL) final at the Fatorda Stadium, Mumbai City head coach Sergio Lobera said it is a very special feeling for everyone at the club to emerge as the league winners. Mumbai City FC beat ATK Mohun Bagan to clinch their maiden ISL title on Saturday. Lobera's men made it two trophies in two weeks becoming just the second team to top the group phase and win the title. Bipin Singh scored a 90th-minute winner after a Tiri's own goal (29') had dragged Mumbai level. Bagan had earlier taken the lead through David Williams (18').

"The feeling is impossible to describe. There are a lot of emotions. A lot of effort. Very happy for the Mumbai City family, City Football Group (CFG) our families, the players, very proud of the team. It's not just about the players. We are a family and finally, on the pitch, you can see that and this is what we deserve," Lobera said after the game.

"Our families, my players, City Football Group (CFG) people always give us support and advice. It's very special for everyone to win the league. It's not easy to be in the bio-bubble but finally, I'm very happy because we can enjoy this moment," he added.

Lobera credited the success to his team players and support staff for giving their best all the time.

"Very happy because it's about the coach. If you want to win trophies, you need to have very good players, staff, very good club. Not easy to win two trophies in the same season and we make history we the club. We achieved a peak," he said.

"The Indian players are key to winning trophies. You're playing with six players in the first XI and Bipin (Singh) has had an amazing season. There are a lot of players doing well. Players with the opportunity to play, players with not so many opportunities to play, but always smiling and with a positive attitude," the Spaniard added.

Mumbai City FC Mohun Bagan Football
Get the latest updates on IPL 2021, IPL Points Table , IPL Schedule 2021 , live score . Like us on Facebook or follow us on Twitter for more sports updates. You can also download the NDTV Cricket app for Android or iOS.