IPL 2018: Under Pressure Mumbai Indians Take On SunRisers Hyderabad In A Battle To Re-Discover Winning Touch 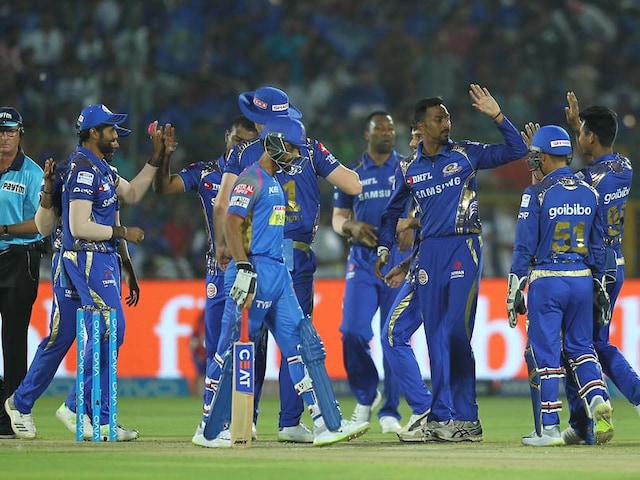 Under pressure after slumping to their fourth loss in five games, defending champions Mumbai Indians have the onerous task of re-discovering their winning touch when they lock horns with SunrRisers Hyderabad in an IPL match on Tuesday. MI had started their campaign with three losses on the trot before a victory over Royal Challengers Bangalore arrested the streak, but the three-wicket defeat on Sunday in Jaipur to Rajasthan Royals, their fourth last-over setback, has put them under tremendous pressure.

With nine games left before the play-off stage, MI find themselves in a difficult situation to win at least seven of them to improve their chances. As such, a win over SRH on Tuesday is imperative to keep them in the hunt.

SunRisers too have slipped from their earlier top perch after suffering back-to-back defeats, following three straight wins, and would be as keen to bounce back to winning ways.

MI's campaign has been led from the front by local product Suryakumar Yadav who has been the top batsman with a consistent run of good scores in the opening slot which has left him four short of reaching the 200 mark for the season.

However, lack of runs from Rohit Sharma barring one match-winning knock of 94 against Royal Challengers Bangalore has hurt badly the three-time champions' run and they need their inspirational captain to make it up with a big knock against SRH.

Another major disappointment has been the big West Indian Kieron Pollard who has mustered just 54 runs in five games. He is in danger of being left out at the bench.

The Trinidadian's compatriot Evin Lewis has been neither outstanding nor a total let-down with the bat, but the Pandya brothers -- Hardik and Krunal -- have not sparkled with the bat.

Pace bowler Jasprit Bumrah showed he is close to his best in Sunday's game against RR although he could not get MI across the finish line with a final burst of wickets, while Mustafizur Rahman has been a good foil.

Mitchell McClenaghan has got among the wickets but has leaked runs too while the Pandya siblings have done a decent job with the ball.

MI have not made too many changes to their playing eleven and could mull over it seriously before it is too late.

SunRisers' campaign had begun in pretty impressive fashion with three wins on the trot but successive defeats to Kings XI Punjab and Chennai Super Kings have dented their progress and confined them to the lower half of the table.

While captain Kane Williamson has been in superb form, carrying the batting on his shoulders to amass 230 runs in five games, the other batsmen, including Shikhar Dhawan, have not given him adequate support.

Wriddhiman Saha has been particularly below par with the bat with a tally of a measly 62 runs and needs to buck up quickly or lose the spot to Shreevats Goswami.

Yusuf Pathan showed glimpses of his old attacking self against RR with a quick 27-ball 45, but overall his batting has been below par.