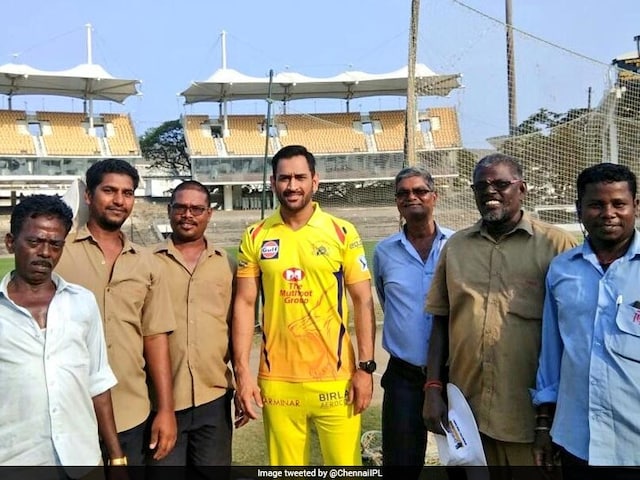 From being a doting father to a loving husband, we have been witnessing different shades of MS Dhoni, apart from his on-field displays. The crowd-favourite Chennai Super Kings (CSK) skipper once again won hearts after he was seen spending some time with the stadium ground staff on International Workers' Day. "A super happy #InternationalWorkersDay to each and everyone who contributes to the welfare of the good game. A big shout out to the ground staff in Chepauk and Pune! #whistlepodu #Yellove," Chennai Super Kings official handle tweeted.

A super happy #InternationalWorkersDay to each and everyone who contributes to the welfare of the good game. A big shout out to the ground staff in Chepauk and Pune! #whistlepodu #Yellove ???? pic.twitter.com/8AeQpQa0ru

U are Real hero
Nice human

Whistle podu with the thala????

Chennai, who are at the top of the points table with 12 points, will look to continue the winning momentum when they take on Kolkata Knight Riders at Eden Gardens on Thursday. Dhoni has turned back the clock with his last three innings, two of them half centuries, adding to the fine run of imposing all-rounder Shane Watson. Both the teams are on the back of two morale-boosting wins. While KKR successfully chased 176 against Royal Challengers Bangalore in Bengaluru, CSK reigned supreme against Delhi Daredevils at their adopted home in Pune.

Dhoni has been a major factor in CSK's success with his batting and the ever-inspiring captaincy. His decision to make four changes against Delhi showed the team's depth and his faith in the bench-strength.

His knock of 70 not out from 34 balls to hunt down RCB's 205 still remains the talk of the town. The way he sealed the game with his signature swing over wide long on boundary brought back memories of the 2011 World Cup triumph.

With a handsome 12-7 win-loss record, the Dhoni-led side will start favourite to win