Mahendra Singh Dhoni added yet another feather to his glittering cap by holding the record for most number of stumpings in the Indian Premier League. 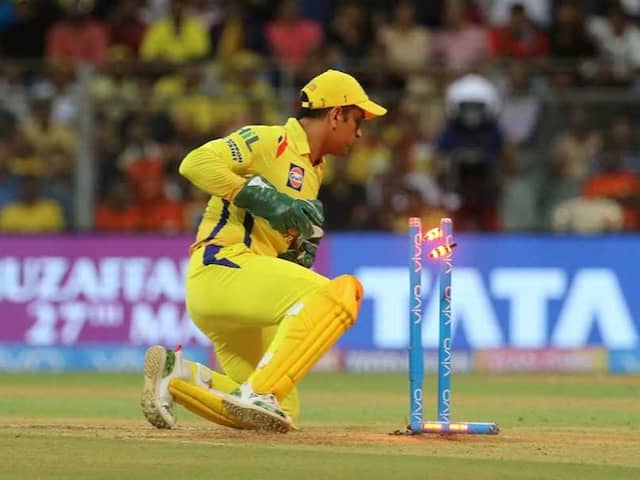 MS Dhoni achieved the feat during the IPL 2018 final between CSK and SRH.© BCCI

Mahendra Singh Dhoni added yet another feather to his glittering cap by holding the record for most number of stumpings in the Indian Premier League. MS Dhoni achieved the feat during the Indian Premier League (IPL) 2018 final between Chennai Super Kings and SunRisers Hyderabad when the CSK captain stumped SRH captain Kane Williamson. With Williamson's wicket, Dhoni took his overall tally to 33 stumpings. Ahead of the IPL 2018 summit clash, Dhoni needed just one stumping to go past Kolkata Knight Riders' Robin Uthappa, who has 32 stumpings to his name.

Kolkata Knight Riders captain Dinesh Karthik is in third in the list with 30 stumpings to his name .

Here are the top four cricketers with the most number of stumpings in IPL:

Out of the 11 complete seasons, the 36-year-old has led Chennai Super Kings in all their nine seasons and captained now-defunct Rising Pune Supergiant (RPS) in the 2016 edition.

With 116 dismissals (83 catches and 33 stumpings), the former India captain is the second most successful wicketkeeper in the IPL. Dinesh Karthik leads the most dismal chart with 124 dismissals (94 catches and 30 stumpings) to his name.

After guiding CSK to third IPL title win, Dhoni had admitted that the age-group of his side has been a matter of concern for him.

"The age-group of the boys was definitely a concern, you had to keep them fit. We had to take care of the resources and to make sure that when we come to the business end of the tournament, the best 11 is available for selection," Dhoni said.

"This year we have been able to do that. We did have a injury concerns in the middle, but it is good to have all the players available for selection."