Chennai Super Kings returned to the Indian Premier League (IPL) after serving two-year ban and their 'Thala' Dhoni gave them a memorable gift, leading the Yellow Brigade to third title. 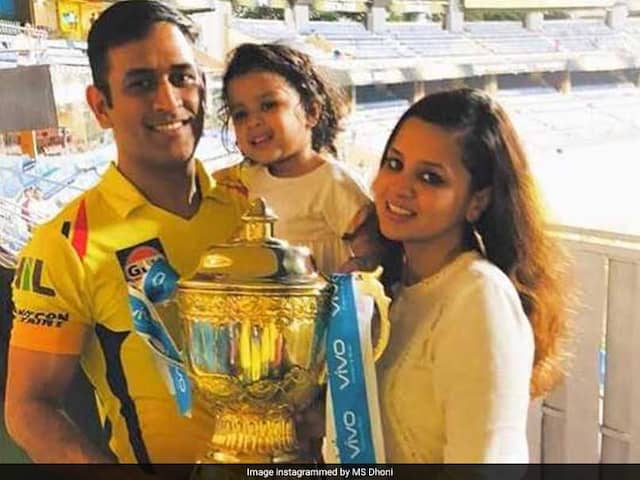 Ziva was seen playing with Dhoni and other team members of the Chennai outfit.© BCCI

Mahendra Singh Dhoni and Chennai Super Kings are made for each other. Chennai Super Kings returned to the Indian Premier League (IPL) after serving two-year ban and their 'Thala' Dhoni gave them a memorable gift, leading the Yellow Brigade to third title. Just after the win, the Chennai Super Kings captain Dhoni took to Instagram and shared a photo with his wife Sakshi and daughter Ziva. Apart from Shane Watson, who played a stellar role in CSK's title win, Dhoni also said: "Ziva doesn't care about the trophy, wants to run on the lawn."

Watching CSK team's wild celebration after the title win, daughter Ziva was also seen in celebratory mood. She was seen playing with Dhoni and other team members of the Chennai outfit.

Thanks everyone for the support and Mumbai for turning yellow.Shane 'shocking' Watson played a shocking innings to get us through.end of a good season.Ziva doesn't care about the trophy, wants to run on the lawn according to her wordings.

Making a comeback in the IPL after a two-year ban, CSK outplayed SRH by eight wickets.

The star of the match was Shane Watson who single-handedly guided CSK to a massive win against Sunrises Hyderabad. Watson scored an unbeaten 117 off 57 balls in a high-pressure game.

The Australian smashed 11 fours and eight sixes in his match-winning knock.

"By the time you reach the final everybody know their roles. The fielders have to adjust their roles while fielding, but while batting the styles are well known. So if somebody is finding it difficult in the middle, you know the incoming batsmen wouldn't find it easy as well. Well, Bhuvi is as deceptive as Rashid and thus it's not just one bowler in their side who could put pressure on us. So it was a good batting effort, but we always had belief in the firepower our middle-order has," Dhoni said after the match.

"A lot of people talk about stats, so tonight is 27th, my jersey number is seven and this is the seventh final for us. Enough reasons to win it. But none of these reasons matter, what matters is that we've won it in the end," Dhoni said.

Comments
Topics mentioned in this article
Chennai Super Kings Sunrisers Hyderabad MS Dhoni Indian Premier League 2018 Cricket
Get the latest Cricket news, check out the India cricket schedule, Cricket live score . Like us on Facebook or follow us on Twitter for more sports updates. You can also download the NDTV Cricket app for Android or iOS.