After beating Sunrisers Hyderabad by 6 wickets, Delhi Daredevils keep their chances alive to qualify for the IPL Play-offs. 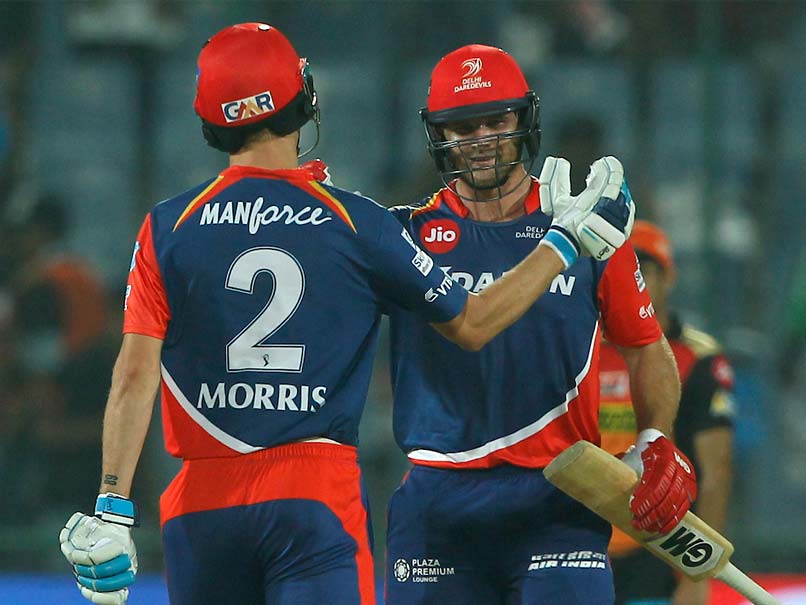 Delhi Daredevils snapped their five-match losing streak with a comfortable six-wicket win over Sunrisers Hyderabad and mathematically remained in the race for the IPL play-offs here tonight. Yuvraj Singhscored a timely 70, his second half-century of the season, and raised a 93-run stand with Moises Henriques (25) to lead the visitors to a challenging 185 for three after being asked to bat. The hosts, who have been enduring a tough season with one defeat after another, then came up with an inspiring collective bating show to stun the defending champions with five balls to spare. Each and every Delhi batsman, who took strike, contributed in the win.

Openers Karun Nair (39) and Sanju Samson (24) scored 40 runs in first four overs to provide a decent start and the batsmen who followed them built on the momentum. Rishabh Pant (34) and Shreyas Iyer (33) batted with dogged determination to ensure that the required run-rate never go out of hands.

Nair was dropped on 20 by Bhuvneshwar Kumar but the Daredevils stand-in captain could not make full use of the life and was dismissed by Siddarth Kaul.

Runs came at a good pace for the hosts with young batsmen batting sensibly. They needed 61 from last seven overs and with Anderson and Iyer at the crease, it was not a big task. However, Iyer was dismissed by Bhuvneshwar.

Since the Delhi batsmen lost wickets after getting their eyes in, it kept Sunrisers' hopes alive but gradually the required run rate dropped and Corey Anderson (41 not out) finished the match in company of Chris Morris (15 not out).

With this win, which is their third, Daredevils lifted themselves to the sixth spot from the earlier bottom place with five more matches to play while Sunrisers remained on third spot with 13 points.

SRH were off to a flying to start through skipper David Warner (30) and Shikhar Dhawan (28) but Delhi spin duo of Amit Mishra and Jayant Yadav managed to choke the defending champions in the middle overs.

Sanju Samson dropped Yuvraj on 29 and the dashing left-hander exploited it to get some crucial runs for his side. After making 62 against RCB in his first match, he was struggling for runs and found touch when the team needed.

He took some time to settle down on a slow pitch but gradually stroked the ball nicely. His 70 came off 41 balls with 11 fours and a six.

Earlier, Mishra played a crucial role in choking the Hyderabad batsmen as he gave away only 23 runs in his four overs and also got rid of Dhawan.

Jayant Yadav, included in place of Shahbaz Nadeem, also did a great job by conceding only 26 runs in his four overs.

Warner began from where he left against KKR, striking the ball confidently. He found boundaries off Yadav and Rabada with remarkable ease.

Dhawan also was in tremendous touch as he creamed off two fours and a six off Chris Morris. The SRH openers were never troubled by the home bowlers. Warner smashed one from Mohammed Shami to mid-wicket boundary to raise the team's fifty.

However, Shami took revenge in the next ball with a well-placed yorker that uprooted Warner's off stump.

Mishra has not bowled during Power Play overs this season and the trend continued. He bowled the ninth over and struck in second ball as Dhawan top-edged the googly to Shreyas Iyer, who covered good distance to take the catch.

The two wickets affected the run flow but the visitors still put on board 83 at half-way mark as Kane Williamson (24) found a few boundaries.

Tight overs by Morris, Mishra and Yadav, created pressure and Williamson, trying to break free, went for a pull off Shami bouncer but only top-edged it to Morris.

There was gap of 15 balls when no boundary was struck. Yuvraj finally found one off Shami and it raised the team's 100 in 13.2 overs.

Runs were still tough to come by for SRH with Yuvraj and Henriques managing only singles and doubles. Yuvraj though changed the script after being dropped.

Comments
Topics mentioned in this article
Delhi Daredevils Sunrisers Hyderabad Karun Nair David Warner Corey Anderson Yuvraj Singh IPL 2017 Cricket
Get the latest updates on ICC Women's Cricket World Cup 2022 and IPL 2022, check out the Schedule , Live Score and IPL Points Table. Like us on Facebook or follow us on Twitter for more sports updates. You can also download the NDTV Cricket app for Android or iOS.