Kesrick Williams settled the score with Virat Kohli by changing his celebration after dismissing the Indian captain in the second T20 International in Thiruvananthapuram. 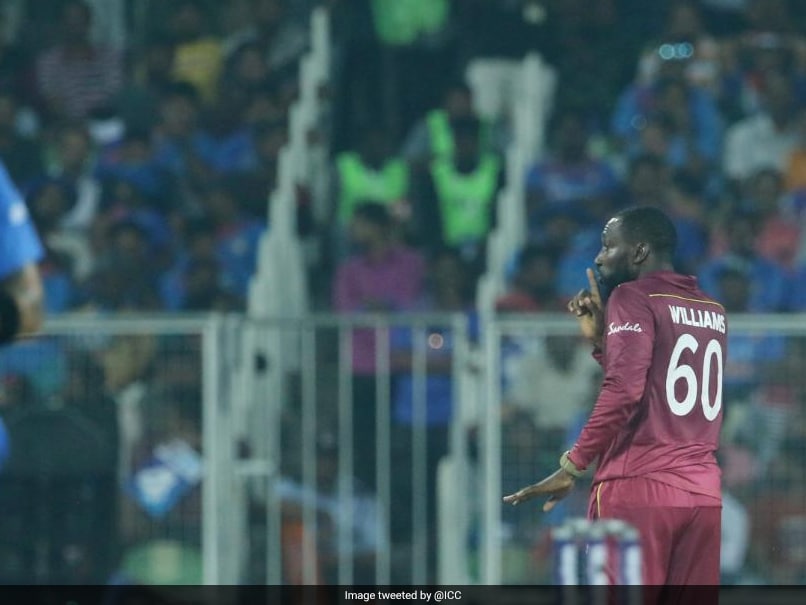 West Indies fast bowler Kesrick Williams settled the score with Virat Kohli by changing his celebration after dismissing the Indian captain in the second T20 International of the three-match series in Thiruvananthapuram on Sunday. Kesrick Williams' signature "notebook" celebration wasmimicked by Virat Kohli after being hit for a six in the first T20I in Hyderabad on Friday. In Thiruvananthapuram, Kesrick Williams avenged his humiliation by dismissing Virat Kohli for 19 in the 14th over and instead of celebrating it a with a virtual "notebook", he put his index finger on his lips and sent Twitter into a frenzy.

The International Cricket Council (ICC) shared a picture of Williams' celebration after Kohli's wicket in the second T20I. Fans flooded the post, with some praising the West Indies bowler for "smart celebration" while other cautioning him to not tease Kohli again as he will come back stronger in the third T20I in Mumbai.

2017: Kesrick Williams gives a send off to Virat Kohli with a 'tick in the notebook' celebration

2019: Kohli smacks Williams all round the park & did the same

He is silencing himself not crowed.he understood not to sledge this guy.should keep maouth closed

Muted celebration he knows very well that he will definitely managed this next match pic.twitter.com/t7Vpa8Zb4B

Finally K Williams UnderStood not to Sledge Or Celebrate Like the Way He Do ( NoteBook Celebration ) Against The Legend & King #ViratKohli Cozz The Answer Which Kohli Gave In Last Match, Williams Will Remember that For the Rest oF His LiFe #INDvsWI

Pakka Virat has made a note of it. Wait for the time he will give it back !

Williams took two wickets as the West Indies restricted India to 170/7 after opting to bowl. The visitors then rode on an unbeaten half-century by Lendl Simmons to beat India by eight wickets and level the three-match series 1-1.

In the first T20I, which India won by six wickets, Kohli imitated Williams's "notebook" celebration after hitting him for a six.

Virat Kohli Kesrick Williams India vs West Indies 2019/20 Cricket India vs West Indies, 2nd T20I
Get the latest updates on SA vs IND 2021-22, check out the Schedule and Live Score . Like us on Facebook or follow us on Twitter for more sports updates. You can also download the NDTV Cricket app for Android or iOS.