India chased down the target with eight balls to spare against the West Indies to clinch the three-match ODI series 2-1. 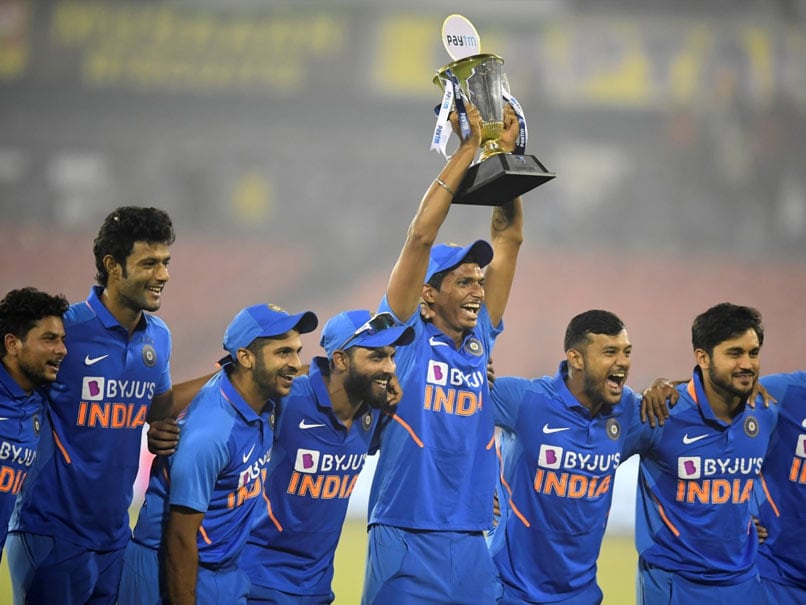 India sealed the ODI series with a 4-wicket win over the West Indies in Cuttack.© AFP

Virat Kohli top-scored with a knock of 85 as India clinched the three-match One-Day International (ODI) series against the West Indies in Cuttack on Sunday. India chased down the target with eight balls to spare. Apart from Virat Kohli, KL Rahul (77) and Rohit Sharma (63) also scored half-centuries to help India beat the West Indies by four wickets. The visitors removed Kohli in the 47th over but Ravindra Jadeja remained unbeaten on 39 to help India cross the line in a tense finish in the series decider.

Earlier, India captain Virat Kohli won the toss and elected to field in the series decider at the Barabati stadium.

The West Indies were off to a cautious start but Ravindra Jadeja broke the opening stand by removing Evin Lewis for 21.

Debutant Navdeep Saini struck twice for the hosts as he removed Shimron Hetmyer and Roston Chase in quick succession.

Late flourish from the West Indies captain Kieron Pollard, who remained unbeaten on 74, saw the visitors put on a competitive total of 315 for five in their quota of 50 overs.

In reply, Rohit Sharma and KL Rahul provided India with an opening stand of 122.

Jason Holder struck in the 22nd over to remove Rohit for 63.

Alzarri Joseph picked up the second wicket in form of KL Rahul, who scored 77 runs.

India then lost Shreyas Iyer, Rishabh Pant and Kedar Jadhav cheaply and at one stage, were in trouble at 228 for five in chase of 316.

After losing the skipper late in the chase, Jadeja finished the game in the 49th over along with Shardul Thakur.

Ravindra Jadeja India vs West Indies 2019/20 India vs West Indies, 3rd ODI Cricket
Get the latest updates on SA vs IND 2021-22, check out the Schedule and Live Score . Like us on Facebook or follow us on Twitter for more sports updates. You can also download the NDTV Cricket app for Android or iOS.