Virat Kohli is the second fastest to reach 24 Test hundreds in terms of innings, only behind Australian legend Don Bradman. 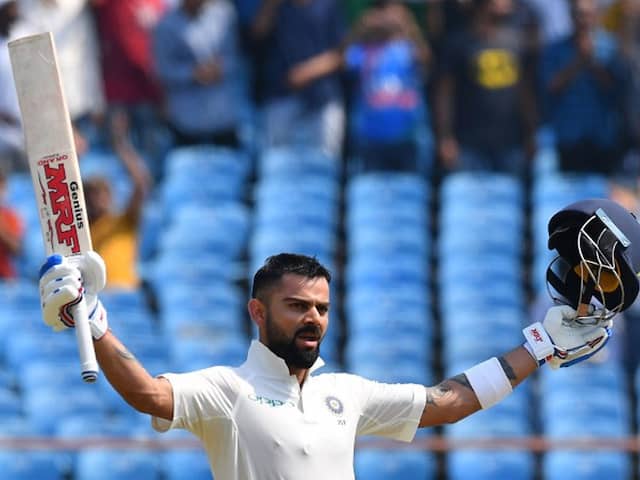 Virat Kohli scored his 24th Test century as India continued to dominate the Windies in the opening Test.© AFP

Virat Kohli missed the entirety of the Asia Cup 2018 in UAE but made a seamless return to international cricket by hitting his 24th Test century. The Indian captain reached the magical three-figure mark on Day 2 of the opening Test between India and the Windies at the Saurashtra Cricket Association Stadium in Rajkot on Friday. Kohli's century helped India pile on more misery on the visiting Windies team on Day 2 after Prithvi Shaw's record century on the opening day of the first Test. Virat Kohli became the second quickest batsman to reach 24 Test centuries, behind only Australian great Donald Bradman.

The Indian skipper also surpassed Australia's Steve Smith to go second in the list of centurions among active players, behind South Africa's Hashim Amla on 28.

Kohli reached his 24th century in his 123rd innings, while Australia's Bradman took just 66 knocks to achieve the same feat.

Kohli, who was unbeaten on 72 at stumps on Day 1, also became the joint-quickest to reach 3,000 Test runs in India, sharing the top spot with Cheteshwar Pujara, who was dismissed for 86 on Day 1.

Kohli and wicketkeeper Rishabh Pant were the two overnight batsmen for India and both of them looked completely at ease on Day 2.

The Windies hardly troubled the duo with captain Kohli, especially, playing a faultless knock. The Indian run-machine gave absolutely no chances to the Windies bowlers and with the help of the odd boundary, coasted to a well-deserved hundred.

Pant gave a good account of himself but sometimes in his zeal to be aggressive, he did give a few chances to the visitors. The wicketkeeper batsman took on the short-ball despite fielders patrolling the boundary.

He reached his half-century by depositing Keemo Paul to the mid-wicket boundary for a maximum. While Kohli played delightful cricketing shots, Pant's innings was a complete contrast.

The left-hander played some powerful, forceful shots against the medium pacers and used the crease to brilliant effect against the spinners.

The 100-run partnership for the fifth wicket between Kohli and Pant also helped India cross the 400-run mark without much fuss.

Pant fell eight runs short of his second Test century, trying to go for a big hit off the bowling off Devendra Bishoo but managed to get only a leading edge.

Virat Kohli Rishabh Pant Don Bradman India vs West Indies 2018 India vs West Indies, 1st Test Cricket
Get the latest updates on IPL 2020, check out the IPL Schedule for 2020 and Indian Premier League (IPL) Cricket live score . Like us on Facebook or follow us on Twitter for more sports updates. You can also download the NDTV Cricket app for Android or iOS.