Ajinkya Rahane (75 not out) and Rishabh Pant (85 not out) were at the crease when umpires called it a day. 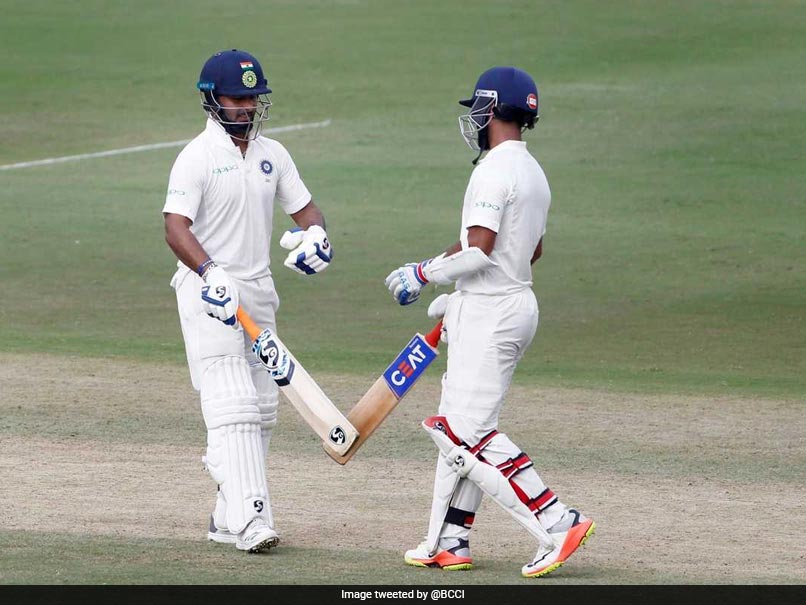 Middle-order batsmen Ajinkya Rahane and Rishabh Pant scored half-centuries as India reached 308 for four to trail by 3 runs at stumps on Day 2 of the second Test at the Rajiv Gandhi International Stadium in Hyderabad on Saturday. Rahane (75 not out) and Pant (85 not out) were at the crease when umpires called it a day. The duo forged an unbeaten 146-run stand for the fifth-wicket. For the Windies, who failed to pick a single wicket in the final session, Jason Holder was the pick of the bowlers returning with figures of 2/45.

The second session belonged to the Windies as India reached 173 runs at the loss of four wickets at tea. Rahane and Pant were at the crease when the umpired called it an end to the second session.

Prithvi Shaw (70), who carried on his impressive start in international cricket, scored his maiden Test half-century but was the first wicket to fall for the home side in the second session after his breezy knock was brought to an end by Jomel Warrican. Cheteshwar Pujara (10), on the other hand failed to click with the bat.

Meanwhile, skipper Virat Kohli (45) looked in solid touch before he being caught plumb in front of the stumps by Jason Holder. Kohli was also involved in a 60-run fourth wicket stand with Rahane.

In the morning session, Shaw (52 batting) forged a 61-run opening wicket stand with KL Rahul (4) as India posted 80/1. Shaw's quickfire knock was laced with 11 boundaries and one hit over the fence. However, Rahul once again looked out of touch, playing poor shots and not timing the ball well enough, which eventually led to his downfall.

Earlier, Umesh Yadav (6 for 88) achieved his career-best bowling figures as Team India dismissed the Windies for 311 runs. Resuming the day on 295 for seven, Umesh got rid of Devendra Bishoo (2) in the very first over of the day.

Roston Chase (106) notched up his fourth Test ton before being deceived by the swing of Umesh. Later, incoming batsman Shannon Gabriel (0), fell in the very next delivery to hand Umesh a hat-trick opportunity in the second innings.

West Indies Cricket Team India vs West Indies 2018 India vs West Indies, 2nd Test Cricket
Get the latest updates on ICC T20 Worldcup 2022 and CWG 2022 check out the Schedule, Live Score and Medals Tally. Like us on Facebook or follow us on Twitter for more sports updates. You can also download the NDTV Cricket app for Android or iOS.