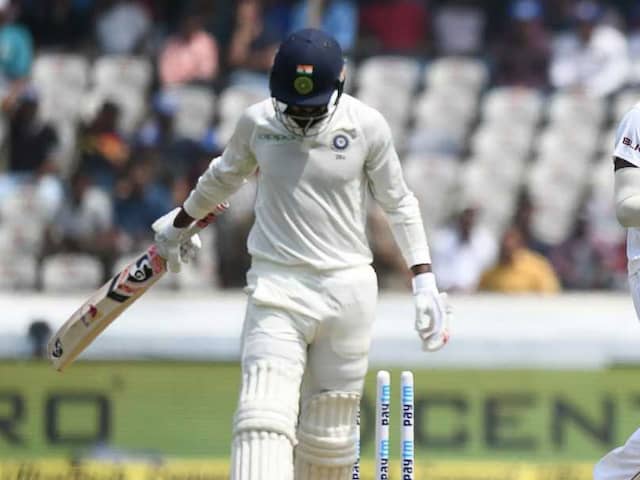 Indian batsman KL Rahul yet again failed to grab his chance as his slump in form continued in the second Test against West Indies in Hyderabad on Saturday. The ongoing home series against the Windies was an opportunity for the Indian batsmen to make amends for their lack of form in the tough away England series. However, with scores of 0 and 4 in both Tests, KL Rahul seems to have blown away his chance to cement his place in the Indian squad in the ongoing Test, KL Rahul could not gauge Windies skipper Jason Holder's delivery and was clean bowled for 4 runs. Social media was livid with his batting performance and their anger was visible on Twitter.

If God gives you Rahul, make it Rahul Dravid not KL Rahul

Its clear that KL Rahul is having some technical issues in his batting. What is Sanjay Bangar doing? Just giving throw downs ? #INDvWI

KL Rahul is the next big thing in cricket, seriously ???
You must be kidding...
He's jus over rated shit

Have we ever seen this kind of surreal backing in Indian Test Team till date ?@klrahul11 @BCCI @vikrantgupta73 @cricketaakash #INDvWI

After winning the toss in Hyderabad, Windies got 311 runs on board in the first innings. Riding on a brilliant century by Roston Chase (106) and captain Holder's fiery fifty (52) helped the visiting side post a decent total. Pacer Umesh Yadav was the star for India taking his career-best Test bowling figures of 6/88 to bundle out the visitors on the second day of the Test.

The Windies has succumbed to a humiliating inning and 272-run defeat at the hands of India in the first Test at Rajkot.

Lokesh Rahul Cricket India vs West Indies 2018
Get the latest Cricket news, check out the India cricket schedule, Cricket live score . Like us on Facebook or follow us on Twitter for more sports updates. You can also download the NDTV Cricket app for Android or iOS.