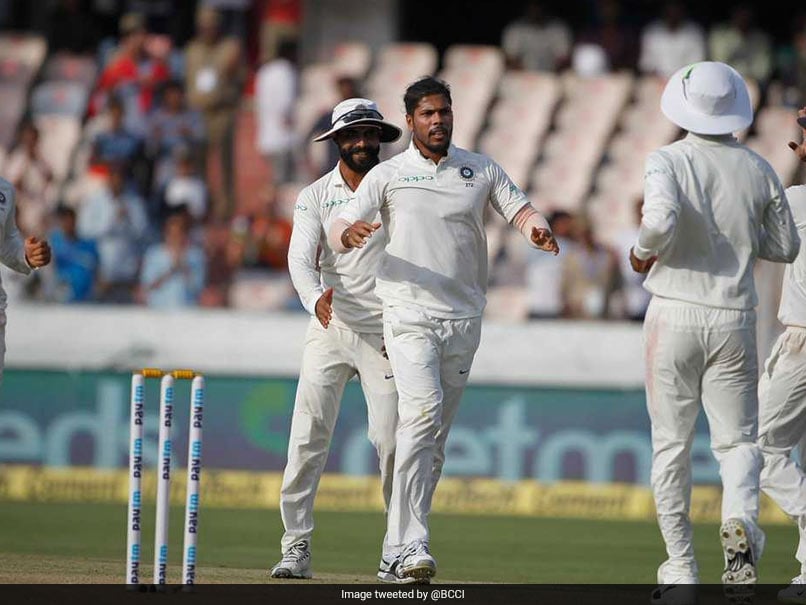 Umesh Yadav was the pick of the bowlers for India as the pacer picked up his career-best Test bowling figures (6/88) on Saturday. Umesh Yadav's six-wicket haul helped India dismiss West Indies for 311 runs in their first innings of the second Test at Hyderabad. Umesh Yadav's bowling figures was the13th best figures for an Indian pacer at the Rajiv Gandhi International Stadium, Hyderabad. With these figures, he also went past former India speedster Zaheer Khan's 4/69 against New Zealand in 2010 in the best figures for a pacer at the Hyderabad venue. Umesh also became the first Indian pacer to pick six wickets in an innings at home since Javagal Srinath's 6/45 vs NZ in Mohali in 1999.

Umesh made his Test debut against the same opponents in Delhi in 2011 where he took two wickets.

Chase brought up his fourth Test century earlier in the second day but his stay was curtailed by Umesh. He was clean bowled by the fiery Indian pacer for 106 runs.

Windies lost the first Test by innings and 272 runs at Rajkot. Windies first innings total of 311 in the second Test has put the match in the balance as they look to salvage this game to prevent a 2-match series whitewash.

Umesh Yadav Cricket India vs West Indies 2018
Get the latest updates on ICC T20 Worldcup 2022 and CWG 2022 check out the Schedule, Live Score and Medals Tally. Like us on Facebook or follow us on Twitter for more sports updates. You can also download the NDTV Cricket app for Android or iOS.