"Rishabh Pant Not Able To Succeed At No. 4": VVS Laxman Suggests New Slot For Wicketkeeper-Batsman

Rishabh Pant has been persisted with at the No. 4 slot for India and he again failed in the third T20 International, leading VVS Laxman to comment on his ability to score at that position. 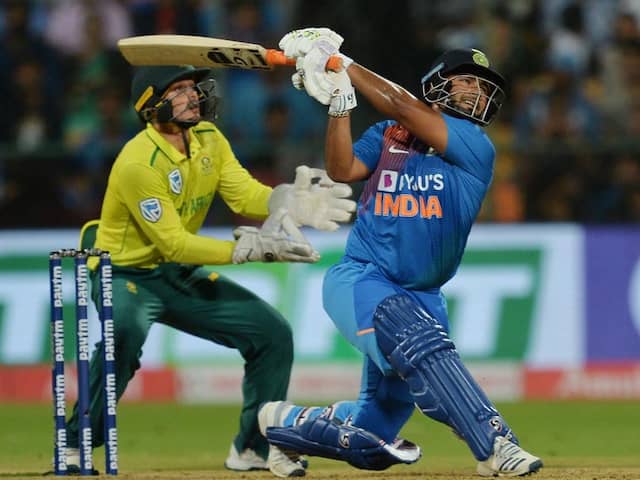 Rishabh Pant's dismal show at the number four position continued on Sunday as he lost his wicket for 19 runs in third and final T20 International against South Africa, which India lost by nine wickets in Bengaluru. In the second T20I, Rishabh Pant managed a score of four runs. Earlier during the tour of the West Indies, the young wicketkeeper-batsman had managed scores of 0 and 4 before scoring an impressive 65-run knock (not out) in three-match T20I series. Former India batsman VVS Laxman believes that the 21-year-old is not cut out for the much talked-about number four position.

"The nature of Rishabh Pant's batting is that he plays aggressive shots. The success came for him in Delhi Capitals during IPL, playing at No. 4 with an average strike rate of 45 but unfortunately at the international level he is not able to succeed at the number four position," Laxman said during a show for the host broadcasters.

"Every player goes through this phase, his natural game is free flowing but suddenly he is not gaining the same results," he added.

Pant's 20-ball 19 couldn't help much in Virat Kohli's plan of batting first at a chase-friendly venue. No team had opted to bat in last six T20Is in Bengaluru.

With just 134 runs on board, India lost the third T20I by nine wickets as South Africa chased down the target in 16.5 overs.

According to Laxman, who played 86 ODIs for India, Pant should bat down the order where he will have a license to hit.

"He is trying to evolve and trying to add different dimensions to his game by rotating the strike that we saw in the previous match but unfortunately, his shot selection at the start of the innings has not been great," Laxman said.

"Pant should bat at number 5 and 6, where you have the license to go out and express yourself and at the moment he doesn't know the right method of scoring runs at number 4," he added.

Laxman added that either Shreyas Iyer or Hardik Pandya can bat at number four as both have more experience than Pant.

"There are other people to bat at number 4 like Hardik Pandya and Shreyas Iyer who are experienced and could play at that spot."

Like many fans and critics, Laxman too see the current phase as transition for Pant, who is on the top of wicket-keeper's list to replace MS Dhoni.

"He also has a lot of pressure as he is taking the place of MS Dhoni who has done a lot for Indian cricket, to get his confidence back the team management needs to let him go bat at number 5 or 6 and express himself," he said.

India will next play a three-match Test series with South Africa, starting in Visakhapatnam on October 2.

Rishabh Pant VVS Laxman India vs South Africa, 2019 Cricket India vs South Africa, 3rd T20I
Get the latest Cricket news, check out the India cricket schedule, Cricket live score . Like us on Facebook or follow us on Twitter for more sports updates. You can also download the NDTV Cricket app for Android or iOS.