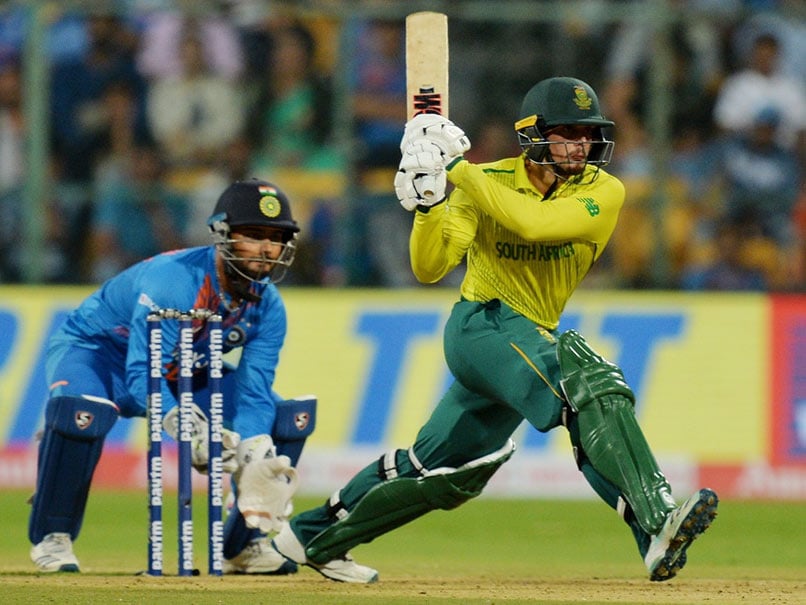 Quinton de Kock took the matters in his own hands by hitting a well-composed half-century as South Africa beat India by nine wickets in the Bengaluru Twenty20 International (T20I) on Sunday to level series 1-1. After South Africa bowlers Kagiso Rabada, Bjorn Fortuin and Beuran Hendricks shared seven wickets between themselves to restrict India to a paltry 134/9 in the stipulated overs on a Bengaluru track, de Kock led the charge for South Africa to ensure his side draws level. Quinton de Kock's unbeaten 52-ball knock was laced with six boundaries and five hits over the fence.

That's a wrap from the T20I series. See you soon in the Tests #TeamIndia #INDvSA pic.twitter.com/oqhhrH0g4D

To everyone's surprise, Kohli opted to bat after the coin landed in his favour on one of the smallest grounds, always known to favour teams chasing in the shortest format.

Initially though, the decision seemed to have worked as India raced to 54 for one in six overs at the M Chinnaswamy Stadium.

The departure of Shikhar Dhawan gave the South Africans an opening, and they grabbed it with both hands, snuffing out eight Indian wickets for 71 runs.

In their chase, South African captain de Kock looked in complete control and struck six fours and five sixes in his unbeaten 52-ball unbeaten 79. He added 76 runs for the first wicket with Reeza Hendricks in 10 overs and then put on another 64 with Temba Bavuma. After moving to 19 in four overs, De Kock cut loose by hitting Navdeep Saini for two sixes, and there was no looking back.

Earlier, India were stopped at 134 for nine by a disciplined South African attack. Top-scorer Dhawan blazed away to a 25-ball 36 and got India off to a brisk start that yielded them 54 runs in the first six overs. Kagiso Rabada was expensive but picked up three wickets, while there were two apiece for Bjorn Fortuin (2/19 in 3 overs) and Beuran Hendricks (2/14).

Playing in his first game of the series, Beuran Hendricks was the team's best bowler without a doubt as he choked run-flow in the middle overs along with left-arm spinner Fortuin.

Virat Kohli India vs South Africa, 3rd T20I Cricket
Get the latest updates on T20 World Cup, check out the T20 World Cup Schedule and Live Score . Like us on Facebook or follow us on Twitter for more sports updates. You can also download the NDTV Cricket app for Android or iOS.