India will aim for a positive start in the three-match home series, especially after having registered a whitewash against the West Indies recently. 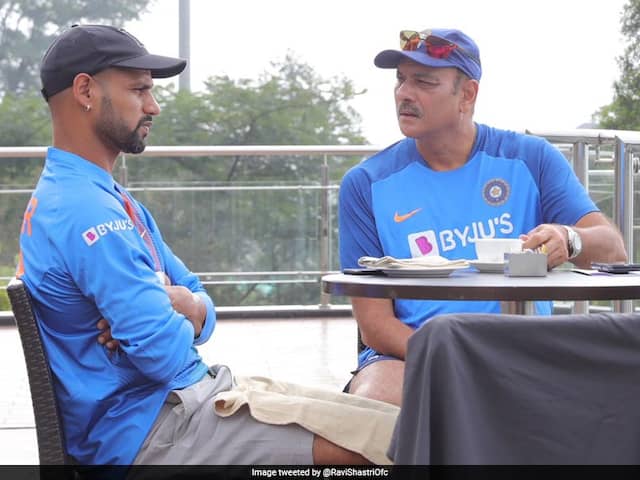 Shikhar Dhawan will look to get back into form against South Africa at home.© Twitter

Ravi Shastri, who was reappointed as Team India head coach in August, was seen having a discussion on cricket over a cup of "coffee" with opener Shikhar Dhawan before the first T20 International against South Africa in Dharamsala on Sunday. India will aim for a positive start in the three-match home series, especially after having registered a whitewash against the West Indies in the Caribbean recently. "Coffee, Mountains, Cricket and Conversation - with @SDhawan25 #TeamIndia #IndvSA," Ravi Shastri captioned the photograph with Shikhar Dhawan on Twitter.

Shastri was retained as head coach for a two-year period, ending with the 2021 T20 World Cup in India.

Under Shastri's tenure, India went on to become the number one ranked team in the ICC Test rankings and performed exceptionally well in the 2019 World Cup, losing just two games out of the nine matches they played.

India's first Test series win in Australia too came under Shastri's term as head coach of the team.

Dhawan, on the other hand, is yet to regain his form as he has been dismissed cheaply in a series of matches after a World Cup hundred in June, during which he suffered a thumb injury to miss out the rest of the tournament in the UK.

In the three-match T20I series against the West Indies, Dhawan managed scores of 1, 23 and 3, before scoring just 38 runs in two innings of the three-match One-day International series in the Caribbean.

Shikhar Dhawan Ravi Shastri Himachal Pradesh Cricket Association Stadium, Dharamsala India vs South Africa, 2019 India vs South Africa, 1st T20I Cricket
Get the latest Cricket news, check out the India cricket schedule, Cricket live score . Like us on Facebook or follow us on Twitter for more sports updates. You can also download the NDTV Cricket app for Android or iOS.