Listen to the latest songs, only on JioSaavn.com
India vs New Zealand 17 Oct 17 to 07 Nov 17
Sports Home
Story ProgressBack to home

An under pressure India will face their stiffest test in recent times when they try to bounce back in the three-match ODI series against a refreshed New Zealand in the must-win second game on Wednesday. 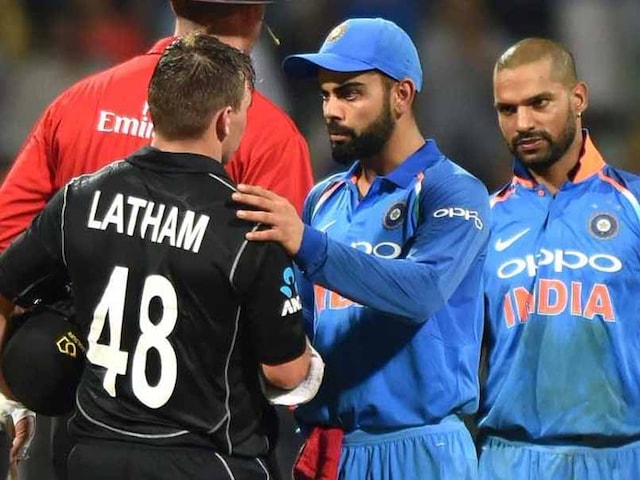 The second ODI will be played at the Maharashtra Cricket Association Stadium, Pune.© AFP

An under pressure India will face their stiffest test in recent times when they try to bounce back in the three-match ODI series against a refreshed New Zealand in the must-win second game on Wednesday. It is not often that India find themselves in a 'save the series situation', having won the last six bilateral engagements. Not many had also expected New Zealand to topple India in the series-opener at the Wankhede but the visitors, playing their first match since the Champions Trophy, did it in emphatic style. It took a record breaking 200-run stand from Ross Taylor and Tom Latham to get the better of their formidable opponents, putting New Zealand on the cusp of a rare series win in India.

The way they played spinners Yuzvendra Chahal and Kuldeep Yadav was commendable, considering the Australians struggled against the same combination in the preceding series.

The hosts, no doubt, were off-colour at Wankhede but the Virat Kohli-led side is expected to come back hard at the Black Caps on Wednesday. Kohli led from the front on Sunday with his 31st ODI ton but did not get the support from his team.

India head coach Ravi Shastri too would want the rest of the side to step up.

The dangerous opening pair of Shikhar Dhawan and Rohit Sharma fell to the swing and accuracy of Trent Boult in Mumbai and they will now have to find a way to negotiate the left-arm pacer early on in their innings.

The Indian captain, who stuck a memorable hundred in his 200th ODI, would like to continue from where he left off. His role will be again crucial if the team has to set up a big total, provided it bats first.

The last time Kohli played at the venue, he ended up scoring a match-winning knock against England in January. The number four spot remains a concern for the team management with 11 batsmen being tried at that position since the 2015 World Cup. Kedar Jadhav batted at number four on Sunday but failed to do the job.

Dinesh Karthik, batting at number five, played a decent knock in his comeback game, stitching a 73-run stand with captain Kohli before throwing his wicket away.

He is expected to make the playing eleven on Wednesday, leaving little possibility of Manish Pandey getting a game. More than 20 overs were left when MS Dhoni walked in to bat but he too could not capitalise after making 25 off 42 balls.

On the bowling front, the spin duo of Chahal and Yadav, who gave away 125 runs and managed a lone wicket, will be keen to make amends. They will have to find way to stop the likes Tom Latham from playing sweep and reverse sweeps at will. India are likely to retain the pacers from the first game.

On the other hand, New Zealand will be high on confidence after a comprehensive win. However, skipper Kane Williamson would like to be among the runs after the forgettable outings in the warm-up match and the first ODI.

Latham and Taylor stitched a special stand at the Wankhede after openers Martin Guptill and Colin Munro squandered promising starts. And they would not want to repeat that again.

The Kiwis missed a second spinner and would be tempted to play Ish Sodhi in the second ODI along with Mitchell Santner, who bowled effectively, in place of medium pacer Colin De Grandhome, who went for runs.

The pace trio of Adam Milne, Boult and Tim Southee will again shoulder the responsibility to take wickets at the top. The Pune pitch was a belter when India played England and another run feast is expected on Wednesday.

(This story has not been edited by NDTV staff and is auto-generated from a syndicated feed.)
Comments
Topics mentioned in this article
India Cricket Team New Zealand Cricket Team Virat Kohli Kane Williamson Maharashtra Cricket Association Stadium, Pune India vs New Zealand Cricket
Get the latest Cricket news, check out the India cricket schedule, Cricket live score . Like us on Facebook or follow us on Twitter for more sports updates. You can also download the NDTV Cricket app for Android or iOS.