India vs England: After India triumphed 3-1 in the Test series, Virat Kohli let some of the newest stars of the team take the spotlight. 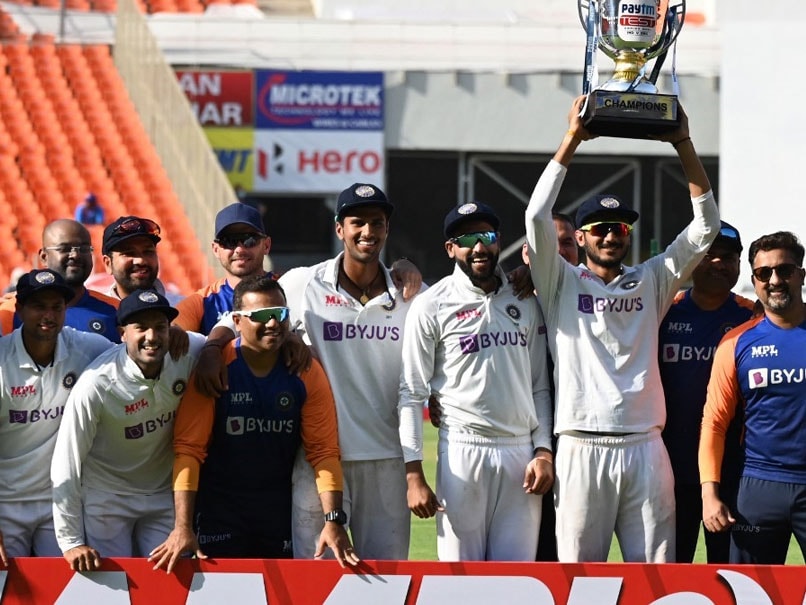 After India thrashed England in the fourth and final Test in Ahmedabad to seal a 3-1 come-from-behind series win, the hosts' captain Virat Kohli gave some of the new stars of the team the chance to lift the trophy. All-rounders Axar Patel, Washington Sundar and pacer Mohammed Siraj were at centre-stage with the trophy as the team celebrated a crucial series win that saw them qualify for the final of the inaugural World Test Championship. The three were later seen posing for pictures with the trophy, joined by Kohli and the star of the final Test, Rishabh Pant.

Axar Patel, who made his Test debut in the second Test in Chennai, took 27 wickets - including four five-wicket hauls - in his first series, proving to be an able replacement for the injured Ravindra Jadeja.

Rishabh Pant, who had hit two half-centuries coming into the last Test, blitzed a 118-ball 101 to change the momentum and put India in control in Ahmedabad.

Washington Sundar also played a brilliant knock and was left stranded on 96 not out as India took a first-innings lead that the visitors could not overcome.

Sundar and Pant's 113-run stand proved crucial as India surged past England's total and posted a lead big enough that the visitors were bowled out without India needing to bat again.

Sundar had also hit an unbeaten 85 in the first Test, even as India lost in Chennai.

The series win saw India go on top of the Test rankings, as well as the World Test Championship standings.

India will play New Zealand in the WTC final in June.

Axar Patel Mohammed Siraj Washington Sundar Cricket
Get the latest updates on India vs South Africa and check out  Schedule, Results and Live Score. Like us on Facebook or follow us on Twitter for more sports updates. You can also download the NDTV Cricket app for Android or iOS.