India vs England: India defeated England on Day 3 of the fourth Test match in Ahmedabad, to qualify for the World Test Championship final. The hosts were praised by fans and cricketers for their dominating win. 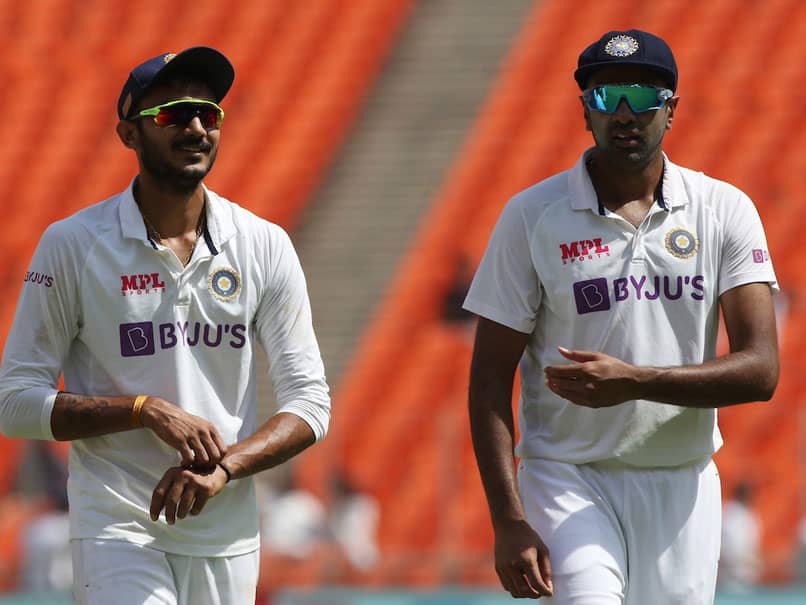 IND vs ENG: Ravichandran Ashwin and Axar Patel during the fourth Test match, in Ahmedabad.© BCCI

Ravichandran Ashwin and Axar Patel were in top form once again, as India sealed a huge win against England on Day 3 of their fourth Test match. The duo registered five-wicket hauls at the Narendra Modi Stadium, helping their side win by an innings and 25 runs. Led by Test legend VVS Laxman, fans and other cricketers hailed India, and also lavished praise on Ashwin and Axar. "The spin twins once again demolish England. Ashwin: 5 for 47 Axar: 5 for 48 #INDvENG", Laxman tweeted.

The spin twins once again demolish England.
Ashwin: 5 for 47
Axar: 5 for 48#INDvENG pic.twitter.com/41yFFEzALK

BCCI president Sourav Ganguly also took to micro-blogging site to hail Team India's "monumental effort" as they played great cricket and clinched the series despite being in the bio-bubble for so long.

Congratulations Team India for winning the series and getting to the finals of WTC ..it's a monumental effort to be in the bubble for so long and still play such good cricket for last 5months .. outstanding..@bcci @imVkohli @JayShah @ThakurArunS @RaviShastriOfc @ajinkyarahane88

With the massive win in the fourth Test, the hosts clinched the four-match series 3-1 against England.

Indicating with the photo of a brain that India won because of their mentality, former India opener Virender Sehwag praised India for their win. He wrote, "Congratulations Team India on an awesome Test Series victory. England didn't lose it in Ahmedabad. They lost it here . #INDvsENG".

England didn't lose it in Ahmedabad.
They lost it here .#INDvsENG pic.twitter.com/NXb1AxCHen

Harbhajan Singh praised India for bouncing back after losing the first Test match in Chennai. With a special mention of Ashwin, Axar, Rishabh Pant and Rohit Sharma, Harbhajan wrote, "3-1 after loosing the 1st test.. Great results for team india @BCCI congratulations to each and every member of the team including the sports staff.. well done to the top performers of the series @ashwinravi99 @akshar2026 @RishabhPant17 @ImRo45 #INDvsENG".

3-1 after loosing the 1st test.. Great results for team india @BCCI congratulations to each and every member of the team including the sports staff.. well done to the top performers of the series @ashwinravi99 @akshar2026 @RishabhPant17 @ImRo45 #INDvsENG

Here are the other reactions on the social media platform:

Fantastic victory #TeamIndia!
Many congratulations on reaching the #WTCFinal.

India have been good but England's top order has made them look outstanding.#indveng

These were the margins of win for India in last 3 test after loosing the 1st match by 227 run.

Well done, Team India. To win a Test series at home without Kohli-Rahane-Pujara scoring a single century and no Jadeja-Shami. That too...after losing the first Test match convincingly. This team keeps growing in stature....appreciation and admiration. #INDvENG pic.twitter.com/OUnJMDCxdK

With India leading by 160 runs after their first innings, England could only muster 135 in their second innings. Despite a half-century by Dan Lawrence, the visiting batting order crumbled against India's spinners.

Earlier on Day 3 during India's first innings, Washington Sundar scored an unbeaten knock of 96 runs off 174 deliveries, to help India post a first innings score of 365.

Axar Patel India vs England 2020-21 India vs England, 4th Test Cricket
Get the latest updates on IPL 2021, IPL Points Table , IPL Schedule 2021 , live score . Like us on Facebook or follow us on Twitter for more sports updates. You can also download the NDTV Cricket app for Android or iOS.