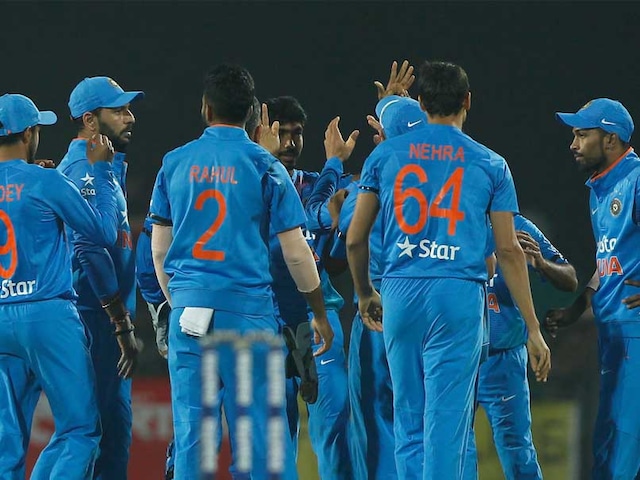 Jasprit Bumrah conceded just two runs from India's final over, as the hosts edged out England by five runs in a thrilling T20I match in Nagpur on Sunday. After posting a total of 144/8, helped by opener KL Rahul's 71-run knock, the hosts restricted England to 139/6 in the stipulated 20 overs to level the three-match T20I series 1-1. Ashish Nehra picked three wickets, including those of openers Jason Roy and Sam Billings, to set India on course for a win at the VCA Stadium. Some disciplined bowling the the late overs then helped India get over the line.

England started their innings well, with openers Jason Roy and Sam Billings scoring 22 runs from the first three overs. However, Ashish Nehra's double-strike early on in the fourth over helped the hosts wrest back control of the match.

Joe Root and skipper Eoin Morgan then steadied the visitors' innings, before Morgan fell to an Amit Mishra delivery. Ben Stokes then had a huge reprieve when his wickets were cleaned out by Mishra, but reviews showed the delivery was a no ball.

Stokes went on to add 38 runs before being dismissed by Nehra. Indian bowlers then tightened the screw on the visitors, putting some severe pressure on England with some very disciplined bowling.

Jos Buttler, however, release some of the pressure with two crucial boundaries in the penultimate over. However, Bumrah's stunning final over handed the hosts a spectacular win in Nagpur.

The hosts, who were in a must-win situation after trailing the three-match series 1-0, rode on a 47-ball 71 from Rahul to reach their total after being put into bat.

Jordan remained the wrecker-in-chief with his three wickets to keep India to what seems a below par score at Nagpur's Jamtha Stadium.

Skipper Virat Kohli, who opened the innings for the second successive time in the series, set out briskly after surviving a confident lbw appeal by Jordan on seven.

The star batsman failed to capitalise on his start after falling to Jordan for 21 as he faltered on a slower delivery to give away a catch to long on.

Rahul kept his composure and his end busy with runs despite England spinners, Adil Rashid and Moeen Ali, getting a wicket each to reduce the hosts to 69 for three.

Rahul, who hit 6 fours and 2 sixes during his knock, got to his fifty, prompting England skipper Eoin Morgan to rotate his fielding and bowling options.

Jordan finally got the dangerous Rahul back in the pavilion in the 18th over to check India's surge as the hosts lost wickets in a heap.

The deciding match of the series will be held in Bangalore on February 1.

Comments
Topics mentioned in this article
Cricket India Cricket Team England Cricket Team India vs England 2016-17 Jasprit Bumrah
Get the latest updates on IPL 2020, check out the IPL Schedule for 2020 and Indian Premier League (IPL) Cricket live score . Like us on Facebook or follow us on Twitter for more sports updates. You can also download the NDTV Cricket app for Android or iOS.