India were asked to bat in the first T20I as Australia skipper Aaron Finch won the toss and elected to field. 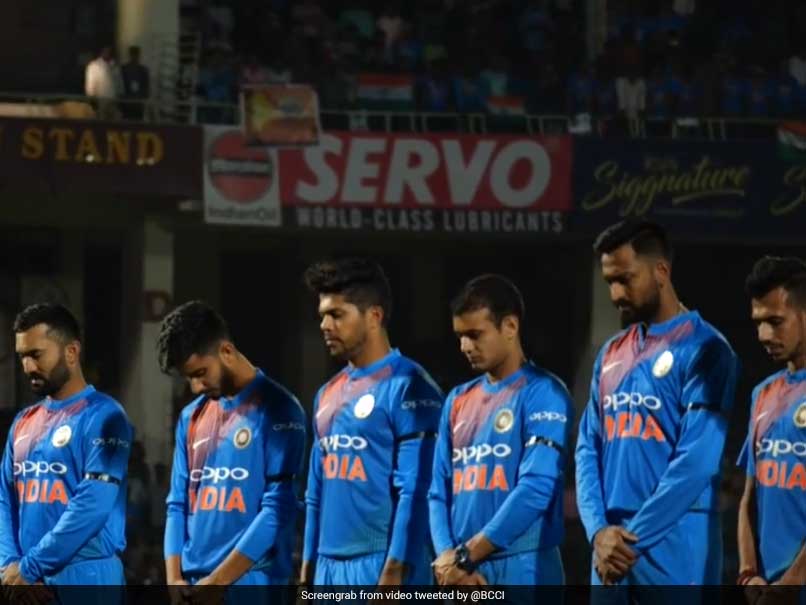 India and Australia held a two-minute silence before the start of the first T20I.© Twitter

Team India paid homage to the soldiers killed in the Pulwama terror attack by wearing black armbands and holding a two-minute silence before the start of the first T20 International against Australia in Visakhapatnam on Sunday. As many as 40 CRPF soldiers were killed in a terror attack in the Pulwama district of Jammu and Kashmir on February 14. On the eve of the T20I series opener, India skipper Virat Kohli at the press conference had said: "Our sincere condolences to the families of CRPF soldiers who lost their lives in Pulwama Attack."

#TeamIndia and Australia pay homage to the martyrs of Pulawama Terror Attack before the start of play today at Vizag.

Talking about the match between India and Pakistan in the upcoming ICC World Cup, Kohli said: "We stand by what the nation wants to do and what the BCCI decides to do."

Following the Pulwama attack, many fans and cricketers have demanded that India should boycott Pakistan in the World Cup, which starts on May 30 in England and Wales.

On Sunday, India were asked to bat in Visakhapatnam as Australia skipper Aaron Finch won the toss and elected to field.

"It looks like a really nice wicket and I don't think it is going to change much," Finch said at the toss.

Kohli returned to action after a brief break to lead the Indian team. Even though the Indian skipper wanted more ODIs in place of the T20I matches, he said that his team would like to treat these T20I games as an extended preparation for the World Cup.

"But look we have to utilise what's in front of us as best as possible. And as I said we're going to look to get into the right kind of frame of mind as a team," he added.

The core team for the World Cup is set but Kohli didn't rule out an exceptional performer getting a look in.

Virat Kohli India vs Australia, 2018/19 Cricket India vs Australia, 1st T20I
Get the latest updates on India vs South Africa and check out  Schedule, Results and Live Score. Like us on Facebook or follow us on Twitter for more sports updates. You can also download the NDTV Cricket app for Android or iOS.