Andre Fletcher smashed an unbeaten 84, including five sixes and six fours, as the West Indies successfully chased down Sri Lanka's paltry score of 122 for nine in their World T20 match in Bengaluru. 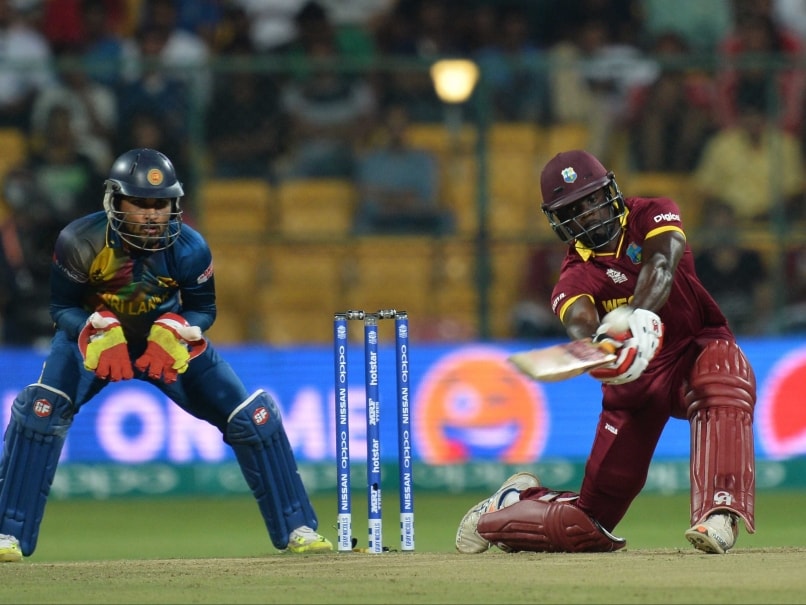 Andre Fletcher spearheaded the attack in the absence of Chris Gayle, who suffered a tweak in his left hamstring, as West Indies beat Sri Lanka in World T20.© AFP
Bengaluru:

Andre Fletcher powered the West Indies to a comprehensive seven-wicket victory against Sri Lanka in their World T20 match in Bangalore on Sunday, even without destructive opener Chris Gayle.

The 28-year-old smashed an unbeaten 84, including five sixes and six fours, as the Windies successfully chased down Sri Lanka's paltry score of 122 for nine.

Fletcher spearheaded the attack with his 64-ball knock in the absence of explosive opener suffered Gayle, who suffered a tweak in his left hamstring while fielding during Sunday's match and did not bat.

A Windies team representative told reporters that the 36-year-old's injury was "not major" but it raises questions about whether he will play in the rest of the tournament.

An unimpressed crowd repeatedly chanted "We want Gayle, We want Gayle", anxious to see the Jamaican who has played several seasons for the city's team in the glitzy Indian Premier League (IPL).

He teased the crowd by stepping out of the bunker with his bat after the third wicket fell, bringing roars from the stadium, only to walk back inside.

Gayle smashed a scorching century last week during the West Indies' demolition of England by six wickets in their opening Group One Super 10 match.

The West Indies are one of the weakest teams in Test cricket, but they remain a force in the shortest format and are gunning for their second World T20 title after winning the trophy in 2012.

Johnson Charles made 10, before chopping the ball onto his stumps, while Marlon Samuels was gone for three and wicket keeper Danesh Ramdin was bowled for five. Andre Russell was not out on 20.

Defending champions Sri Lanka have been struggling for form since winning the trophy two years ago, slumping to seventh in the world rankings.

On Sunday, they posted 122 for nine after West Indies captain Darren Sammy won the toss and elected to field.

All-rounder Thisara Perera top scored for Sri Lanka with 40, including five fours, off 29 balls at the M.Chinnaswamy Stadium, while skipper Angelo Mathews chipped in with 20.

Opener Tillakaratne Dilshan, the star for Sri Lanka in their win over Afghanistan last week, started in promising style, smacking a six off the second ball.

But the 39-year-old was sent packing in the third over, lbw to Carlos Braithwaite.

His opening partner Dinesh Chandimal made a quick 16 runs from 18 balls before he was sensationally run out, thanks to some quick fielding by Johnson Charles at cover.

Chandimal wanted a swift single and took off down the pitch, but was sent scampering back by Lahiru Thirimanne at the other end.

Perera and Mathews combined to steady the ship, adding 44 runs for the sixth wicket, before the captain was caught behind.

Perera was caught at the boundary in the final over by Russell.

The West Indies now play South Africa in Nagpur on Friday while Sri Lanka next meet England in New Delhi on the following day.

Comments
Topics mentioned in this article
Andre Fletcher West Indies Cricket Team Sri Lanka Cricket Team World T20, 2016 Cricket
Get the latest updates on IPL Auction 2023 and check out  IPL 2023 and Live Cricket Score. Like us on Facebook or follow us on Twitter for more sports updates. You can also download the NDTV Cricket app for Android or iOS.