Ireland won the toss and elected to field but the Netherlands openers had to wait for more than two and a half hours to take to the field with the rain-affected ICC World T20 game reduced to 6-overs-a-side. 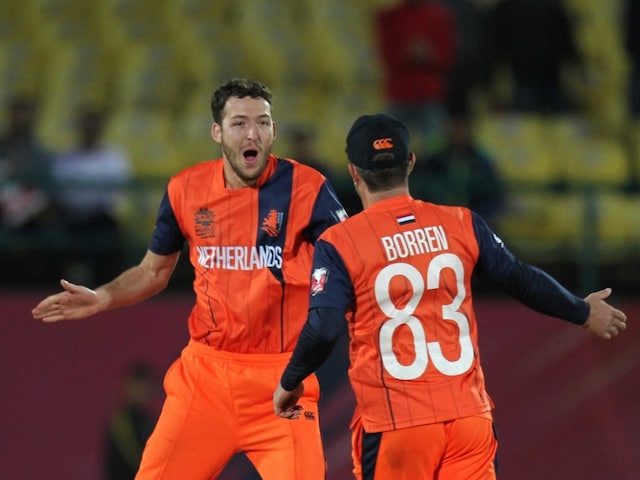 Paul van Meekeren was the star of the show for Netherlands against Ireland, picking four wickets for just 11 runs.© AFP
Dharamsala:

Paul van Meekeren bagged four wickets to help the Netherlands notch up a consolation 12-run win against Ireland via Duckworth/Lewis method in their final match of the World T20 in Dharamsala on Sunday. (SCOREBOARD | POINTS TABLE)

Invited to bat in the inconsequential group tie, the Dutch openers had to wait for more than two and a half hours to take to the field with the rain-affected game reduced to 6-overs-a-side. (Ireland, Netherlands See Hopes Washed Away)

Left-hander Stephen Myburgh struck an 18-ball 27 to help the Netherlands post 59 for five and the bowlers did well to defend the total.

Medium-pacer Van Meekeren (4-11 from 2 overs) tore into the Irish batting getting good support from left-arm spinner Roelof van der Merwe, who picked up two wickets, to restrict Ireland to 47 for seven.

"It's special, I'm not sure if it's happened yet. We had been preparing for this for the last three weeks, maybe six months, and it worked out well," said an out-of-breath Van Meekeren after the win.

Both the Netherlands and Ireland were hard done by rain abandoned games in their respective second outings after losing their opening matches to Bangladesh and Oman.

Later on Sunday, Bangladesh will fight it out with Oman for a place in the Super 10s.

Comments
Topics mentioned in this article
Netherlands Ireland Cricket Team World T20, 2016 Cricket
Get the latest Cricket news, check out the India cricket schedule, Cricket live score . Like us on Facebook or follow us on Twitter for more sports updates. You can also download the NDTV Cricket app for Android or iOS.