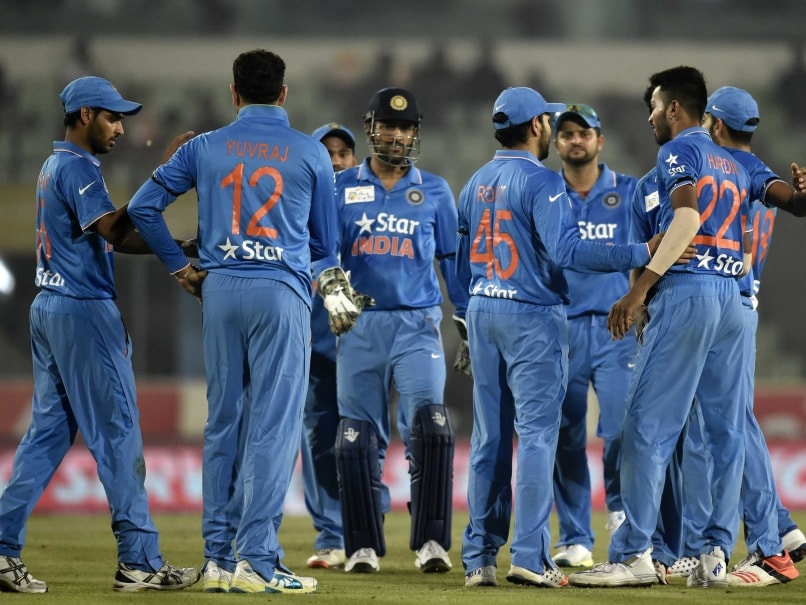 India have been tipped to lift the World Twenty20 crown again.© AFP

Swashbuckling former India opener Virender Sehwag picked India, New Zealand, South Africa and West Indies as the teams which will make the semi-finals of the World Twenty20 starting in India on March 8.

Sehwag has already picked hosts India as favourites to win the coveted title for the second time.

"Apart from India I would pick New Zealand in their group. The teams to watch out from other group will be South Africa and West Indies. India remain favourites to repeat the feat of 2007. They are playing good cricket at the moment and the combinations are working well," Sehwag told PTI on the sidelines of the Royal Stag Perfect Strokes event.

India are yet to lose to Pakistan in a world event and of late have had an upper hand over the arch-rivals. The two teams meet again in the World Twenty20 clash in Dharamsala on March 19. (World T20: Pakistan to Send Security Team to Dharamsala)

What is the reason for India's recent dominance over Pakistan? Sehwag said: "It is difficult to pinpoint a reason but to put it simply, India is playing much better cricket than Pakistan and we have better talent than Pakistan." (PCB Stops Women From Travelling to India for World T20)

Asked whether playing with more aggression has helped India perform better in the recent past, Sehwag said: "You can't win games only with aggression. You win games by playing well. I have never seen only aggression working for a team."

Sehwag, known for his straight talk, had earlier took a dig at Shoaib Akhtar saying the former Pakistan pacer praises Indian cricket and its cricketers for commercial reasons.

"Arrey yaar who to mazaak mein kaha tha, hala kee wo sach tha (I said it jokingly though it is what I feel)."

While Sehwag did not play a farewell match, Brendon McCullum recently retired on a high by scoring the fastest Test century.

Asked about the retirement timing of Indian cricketers, he said: "Our players choose to retire after the series. It is just the way it is. Tendulkar (Sachin) is one who retired in the same manner as McCullum. It is the player's decision to retire and we should respect that. It doesn't matter how one is playing at that time. If he thinks he is done then it (decision) should be respected."

Talking about the health of the game, Sehwag said T20 is most popular but all three formats are relevant.

"All three formats make their own space. T20 is short and that is why more people like to watch the format. People who prefer hard cricket, they still prefer Test and ODIs. Crowds in India are full even for ODIs and for Test cricket as well there is a serious following," he added.

Comments
Topics mentioned in this article
Virender Sehwag India Cricket Team West Indies Cricket Team New Zealand Cricket Team South Africa Cricket Team World T20, 2016 Cricket
Get the latest updates on ICC T20 Worldcup 2022 and CWG 2022 check out the Schedule, Live Score and Medals Tally. Like us on Facebook or follow us on Twitter for more sports updates. You can also download the NDTV Cricket app for Android or iOS.