18:15 hrs IST:West Indies can only take two runs off the fourth and fifth deliveries.They've sealed it as West Indies need eight runs of one ball!!

18:14 hrs IST:Najibullah looks to be in pain after that catch. He is being carried off the field 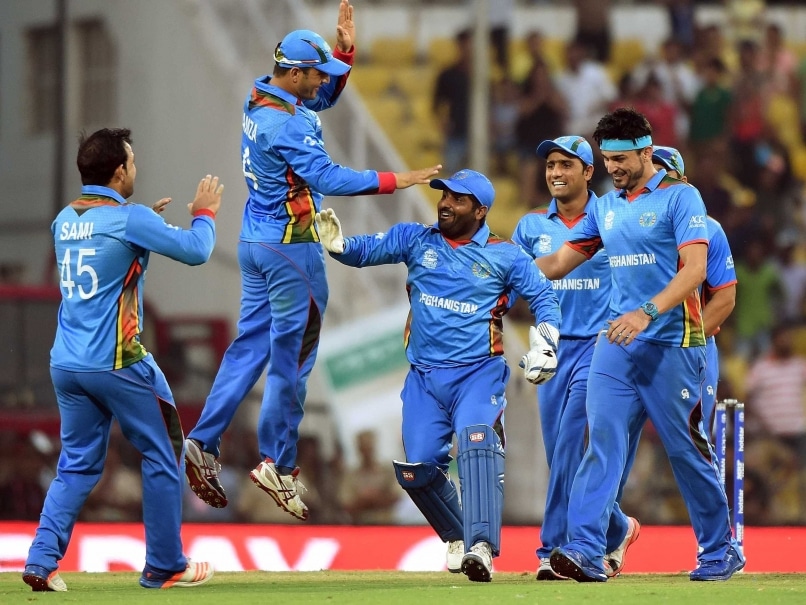 Afghanistan players celebrate after the dismissal of a West Indies batsman.

WICKET! Sammy (6) out. He is caught by Samiullah off Gulbadin at extra cover

WICKET!! Andre Russell is run out by Shahzad

WICKET!! Ramdin (18) out. He is stumped by Ramdin off Rashid. Afghanistn sense a chance to win hereÂ

WICKET! Dwayne Bravo (28) is trapped in front of the wicket by Nabi

17:38 hrs IST: SIX!! Bravo scores a maximum with a heave off Nabi in the mid-wicket region.

17:26 hrs IST: West Indies have a long batting line-up.Bravo and Ramdin at the crease now.Â

WICKET!! Samuels (5) out. He is bowled by a beautiful googly from Rashid Khan

WICKET! Charles (22) out. He is bowled by a gem of a delivery, which cuts in sharply, by Hamid

16:59 hrs IST: FOUR!! Andre Fletcher is off the make with a boundary off Hmid Hassan.

WICKET! Lewis (0) out. The debutant goes with out a run after bring caught by Rashid off Hamza at mid-wicket

16:53 hrs IST: SIX!! Charles is on fire. Again he hits Nabi for the maximum off Charles. 15 runs off the second over.Â

16:48 hrs IST: Hamza misses a c &b opportunity off Lewis. Only one run off the first over by West Indies.

16:46 hrs IST: West Indies opener Elvin Lewis, who is playing his first match, and Johnson Charles are at the crease. Hamza Hotak to open bowling for Afghanistan 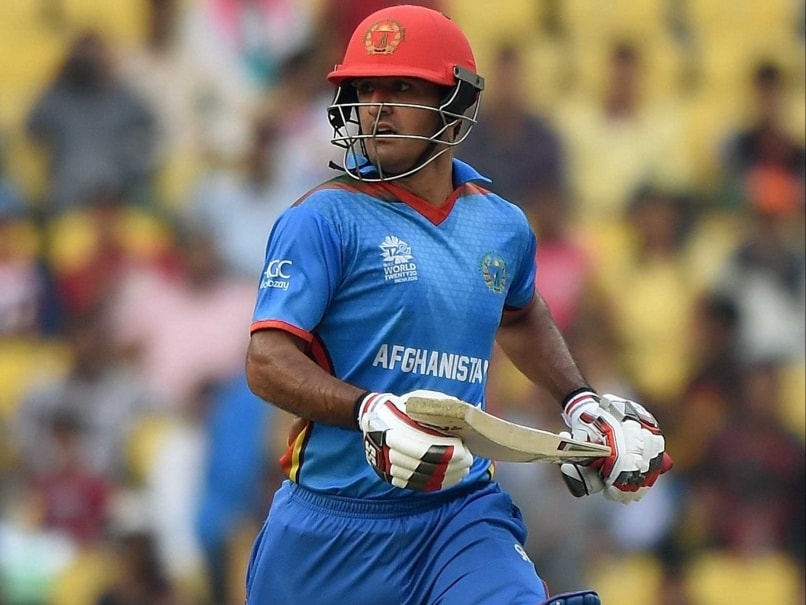 16:25 hrs IST: FOUR! Reverse sweep by Najibullah off Bravo and it's a boundary in the first ball of the 20th over.

WICKET! Shafiqullah (4) out. He goes for the big one, the ball stays in air for some time, and is caught by Fletcher

16:14 hrs IST: FOUR! Najibullah continues hitting Windies bowlers. This time he is lucky as he edges Bravo's delivery for a four in the gully region. Â

WICKET!! Nabi (9) out. What a catch. Nabi's drive is palmed by Sammy at mid-off and is finally caught by Marlon Samuels 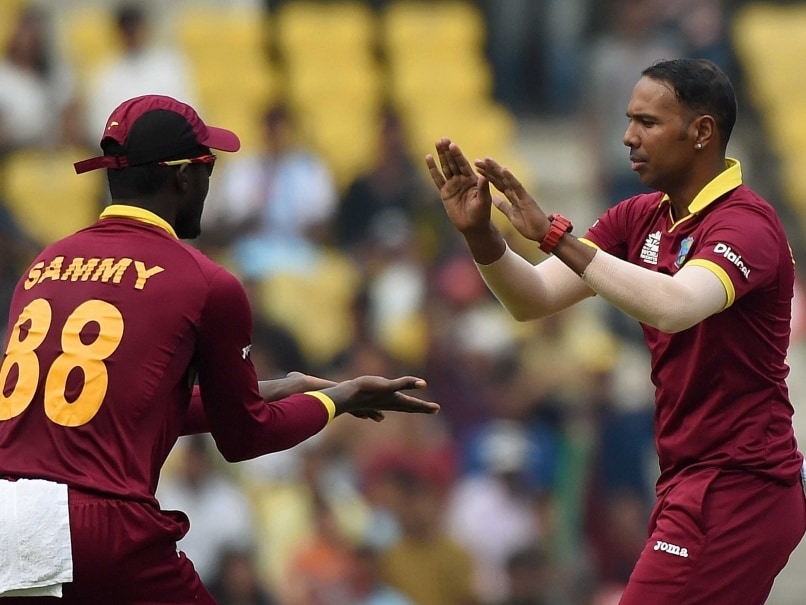 Samuel Badree celebrates one of his three wickets vs Afghanistan.

WICKET! Gulbadin (8) out. Like the other Afghan batsmen, he tried to go after the bowler (Sammy) and is caught by Bravo at long-on

15:47 hrs IST: Darren Sammy to bowl his first over of the tournament.

WICKET! Samiullah (1) out. He edges to Darren Sammy Sammy off the left-arm spin of Suleiman Benn 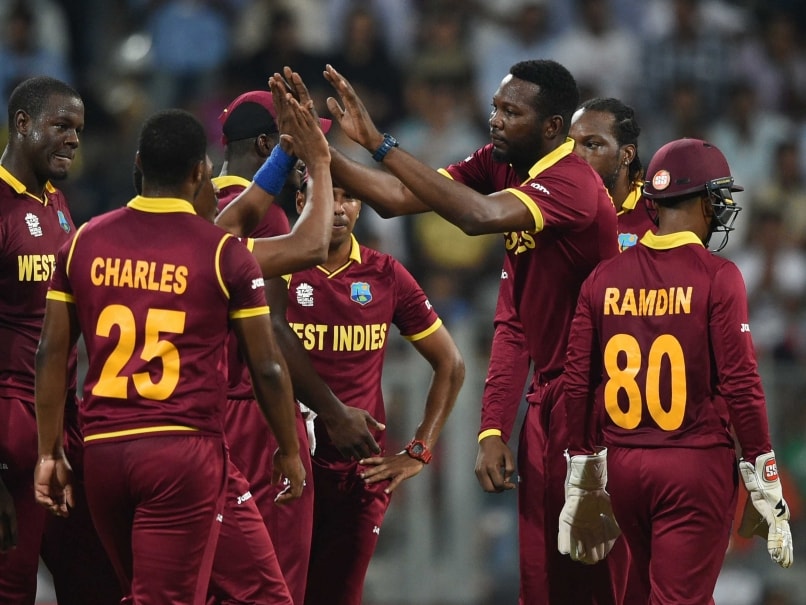 West Indies are aiming to sustain their unbeaten run in their final league game Afghanistan in the World T20.

WICKET!! Stanikzai (16) out. He again tries to hit Badree out of the park and is caught easily by Bravo at long-on.

15:36 hrs IST: SIX!! Asghar Stanikzai has jad enough as he hits Badree for a huge six in the long-on region

15:33 hrs IST: Badree again and he gives just two runs in the eighth over. Afghanistan run-rate is just five per over.

15:30 hrs IST: Sammy's ploy to use five different bowlers has worked brilliantly in their favour so far.

WICKET! Shahzad (24) out. He went down the pitch and tried to heave the ball towards mid-off but is caught by Benn off Badree

15:20 hrs IST: Dwayne Bravo to bowl the fifth over. This is the fifth bowling change in five overs.

15:18 hrs IST: Benn is treated with a SIX in the last ball of the fourth over by Shahzad.

15:14 hrs IST: Shahzad is on fire as he smacks Brathwaite for a four. Nine runs off the third over.

15:13 hrs IST: FOUR!! Shahzad again. This time off Brathwaite, he losted it over leg-side.

15:12 hrs IST: Russell goes off the ground after an ankle twist

WICKET! Ghani (4) out. Badree beats his defence as the ball goes through the gate to rattle the stumps

15:07 hrs IST: Samuel Badree to bowl from the other end

15:05 hrs IST: FOUR! Ghani plays a lofted shot and he gets a boundary. The ball stayed in the air for quite sometime.

15:03 hrs IST: Was that out?? Ghani edges a ball going towards leg and wicketkeeper Denesh Ramdin pounces on it. Third umpire says it's not out.

West Indies and Afghanistan have never played a T20 international before. But by now the West Indians, many of whom like Chris Gayle and Dwayne Bravo ply their T20 expertise around the globe, will be aware of a few Afghan players who are fast learning the tricks of the trade. 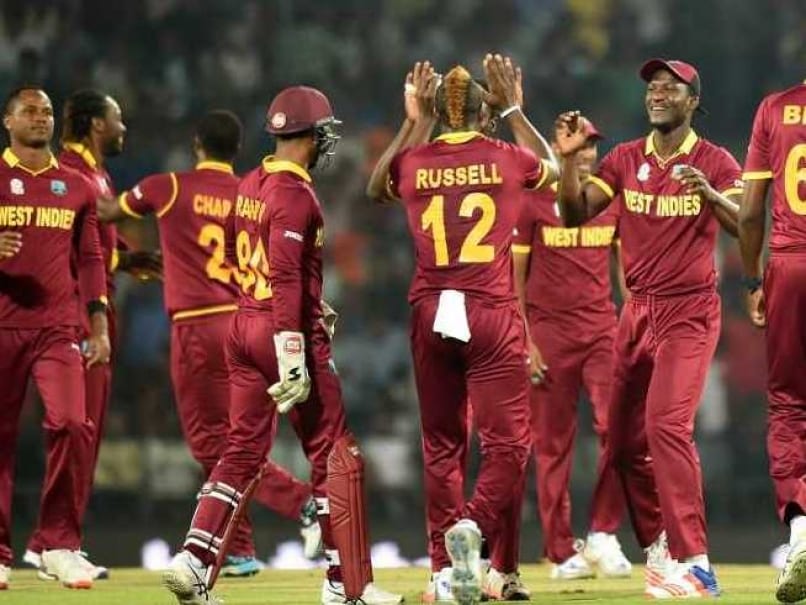 If West Indies beat Afghanistan, they will top Group 1 and play either India or Australia in the semifinals.

West Indies, unbeaten in their last three World T20 matches, will aim to finish on top of their group with a resounding win. This will mean West Indies will play the second semifinal on March 31 in Mumbai.

It was here at the Wankhede Stadium that Gayle smashed that 47-ball century that blew away England in their first match of the World T20. If they top their group West Indies will play the No. 2 team in Group 2. This will be decided after the match between India and Australia in Mohali on Sunday night.

Afghanistan will like the conditions in Nagpur. The slow and turning nature of the pitch has not been great for T20 cricket. The Afghans have played here and won the first round games. If Afghanistan can utilise their spin resources, the West Indies will have a challenge they can't ignore.

Comments
Topics mentioned in this article
Live Cricket Score Live Blogs Afghanistan West Indies Cricket Team Chris Gayle Dwayne Bravo Mohammad Shahzad World T20, 2016 Cricket
Get the latest updates on ICC T20 Worldcup 2022, check out the Schedule and Live Score. Like us on Facebook or follow us on Twitter for more sports updates. You can also download the NDTV Cricket app for Android or iOS.