India followed up their Twenty20 series victories against Australia and Sri Lanka with a dominant performance in the Asia Cup. Mahendra Singh Dhoni's side is tipped to be the favourites to lift the T20 World Cup 2016 title once again. 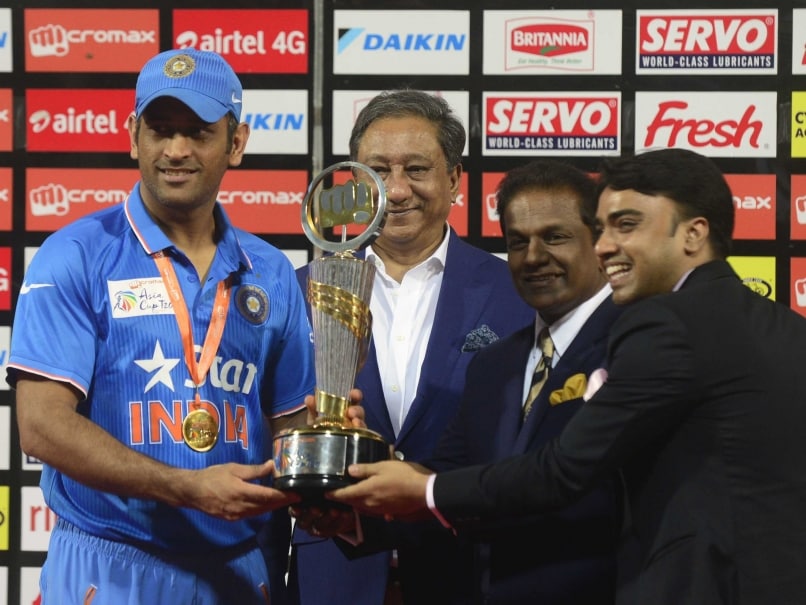 As India lifted the Asia Cup trophy without losing a single match in the tournament, skipper Mahendra Singh Dhoni said they were well on track for the T20 World Cup 2016, beginning in two days time.

India were dominant in their win against Bangladesh in the final, chasing 121 with eight wickets in hand and seven balls to spare.

Dhoni himself finished the match with a six off Al-Amin Hossain and he said, the top order batsmen with their superb show are making it easy for the side.

"Thanks to top-oder batsmen. They have done the bulk of the job, the lower order batsmen just go and do what is needed after that. It's looking very good now, we are on track for the World T20," Dhoni said at the post match presentation. (Match In Pics)

"Jasprit, the beauty is that he can bowl yorkers, if you don't have the yorker you have to try a lot of other deliveries, his slightly different action also helps him a bit. Hardik can bowl a few overs for us, so if he can give us four in T20s, with his batting and fielding he is a great package," he said.

"Looking at this team it is tough to give Yuvi the No.4 slot, but he has adjusted. We have 13-14 players they are all match-winners, that is the beauty of the side, everyone is taking responsibility to finishing the game."

"Important is to get settled combination. That's what we have. We are on track for T20 World Cup," he said.

Man-of-the-match Shikhar Dhawan, who struck 60, said it was a "special" knock for him.

"It's special. The best thing is that we won. As a team we have worked hard. We are peaking at the right time. We were talking while chasing runs. We were comfortable during the chase, never felt the pressure. We were under control," Dhawan said.

Bangladesh captain Mashrafe Mortaza said his team has been doing well and they go into the World T20 with lot of confidence.

"It's upsetting that we couldn't win the final but congratulations to the boys for making it this far. They played really well, we have exciting batsmen and bowlers, hopefully this team will carry on from here. We have a lot of confidence, we have to qualify for the WT20 first, we have a flight early in the morning," he said.

Virat Kohli said it was a tricky situation out there.

"Rohit getting out early made it tricky but credit to Shikhar for the way he batted. He delivering when the team needed the most. The 94 stand (with Dhawan) was the game changer," he said.

Kohli said he loves the challenge of playing against a hostile crowd.

"I back myself to find boundaries and hit the gaps, I don't try to hit too many sixes. I enjoy the crowd being against me, it pumps me up, the more they boo me the more it motivates me," he said.

India's Team Director said he motivated the team to get revenge for their ODI series defeat here.

"I just told them it's a final, enjoy it. Remember the celebrations Bangladesh did when they beat us, so just get the job done," he said.

"We have a good all-round side, packed with power hitters, any of them can fire. If any area we have to tighten up, it is the bowling department. There is tremendous self-belief in the team and the tour of Australia was extremely important, bouncing back to win four matches after losing the first four. I was not surprised one bit when they chased this down," he said.

Comments
Topics mentioned in this article
MS Dhoni Shikhar Dhawan Virat Kohli Mashrafe Mortaza Mohammad Sabbir Rahman World T20, 2016 India Cricket Team Bangladesh Cricket Team Cricket
Get the latest updates on ICC T20 Worldcup 2022, check out the Schedule and Live Score. Like us on Facebook or follow us on Twitter for more sports updates. You can also download the NDTV Cricket app for Android or iOS.