WTC Final: The Indian team received a pep talk from captain Virat Kohli as they sweated it out in Southampton ahead of the World Test Championship final against New Zealand. 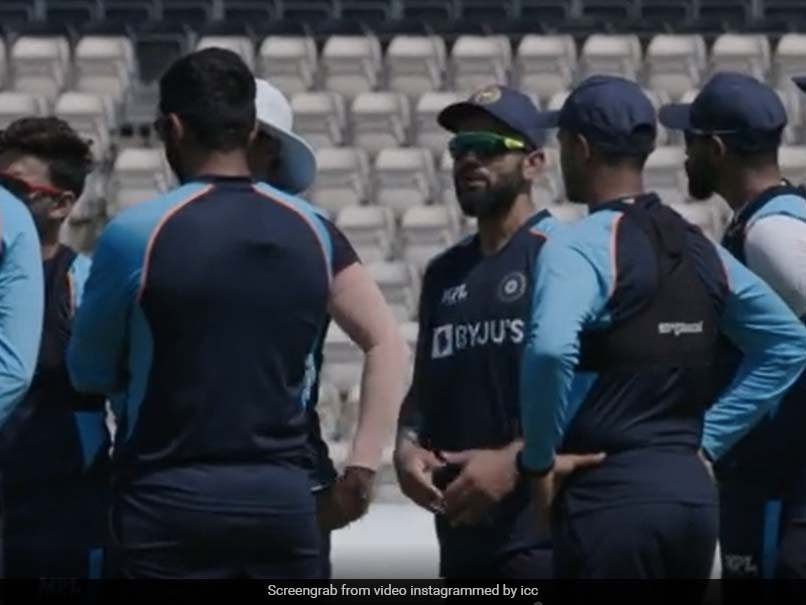 Virat Kohli gave his teammates a pep talk during one of their training sessions in Southampton.© Instagram

The Indian cricket team is sweating it out in Southampton as they gear up to face New Zealand in the World Test Championship (WTC) final, beginning Friday. On Thursday, the International Cricket Council (ICC) took to Instagram to share a snippet from Team India's training session, giving fans a glimpse of how Virat Kohli and his team are preparing for the summit clash at The Ageas Bowl. In the video, the team can be seen fine-tuning their skills and receiving a pep talk from captain Kohli. "India fine-tune for final @indiancricketteam looking sharp before the #WTC21 Final," the video was captioned on Instagram.

India had announced their 15-member squad for the WTC final on Tuesday as some of the heroes from the away Test series win against Australia failed to make the cut.

Washington Sundar, Shardul Thakur and Mayank Agarwal were left out while Ravindra Jadeja's return closed the door for Axar Patel, who had a dream debut against England at home.

KL Rahul, who was one of the captains during the intra-squad match in Southampton, was also not named in the final 15-man squad for the much-awaited clash.

Ahead of the WTC final, India's vice-captain Ajinkya Rahanerevealed the mood in the camp during a pre-match press conference and said that the team is in the final thanks to their consistent performances over the years.

Rahane also added that he is happy to take criticism and said that it doesn't matter if he scores a hundred or scores 30-40 runs, what matters to him is the end result.

"I will be playing my natural game. Winning is really important whether I score hundred or not. I don't want to put too much pressure on myself and even if my 30 or 40 is valuable for the team, I am happy," Rahane said.

Virat Kohli World Test Championship 2021 Cricket
Get the latest updates on Fifa Worldcup 2022 and check out  Fifa World Cup Schedule, Stats and Live Cricket Score. Like us on Facebook or follow us on Twitter for more sports updates. You can also download the NDTV Cricket app for Android or iOS.