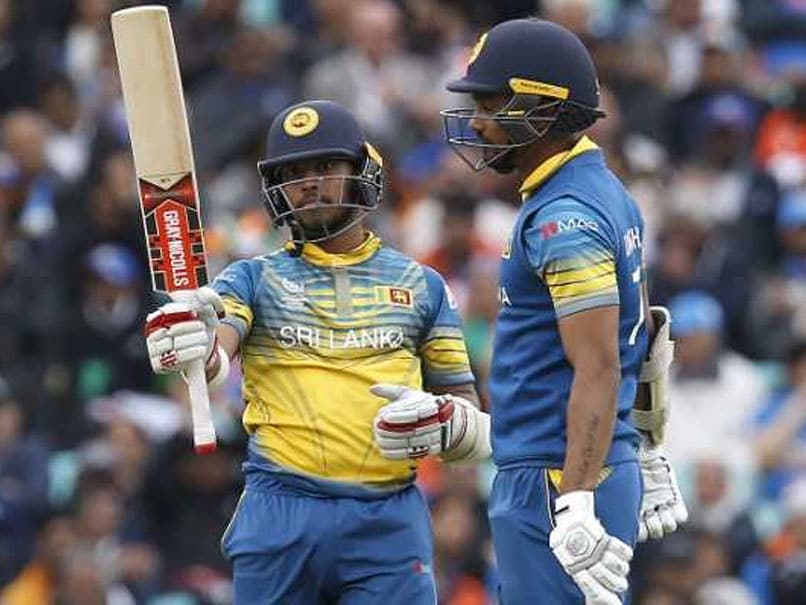 Kusal Mendis celebrates his half century with Danushka Gunathilaka.© AFP

India suffered their first loss in the ICC Champions Trophy 2017 after going down by 7 wickets to Sri Lanka at the Kennington Oval on Thursday. Team India had earlier defeated arch-rivals Pakistan in their opening match of the tournament. With this loss, India's spot in the semifinals of the tournament remains unsure as all the teams in Group B are now on two points each and in with a chance of reaching the last four. It will all boil down to the final round of group matches.

For Sri Lanka, Kusal Mendis top scored with 89 before being run out. Mendis and Danushka Gunathilaka (76) stablised their innings after opener Niroshan Dickwella was caught by Ravindra Jadeja off a Bhuvaneshwar Kumar delivery for just 7 runs. Mendis smashed 11 fours and a six during his stay while Gunathilaka chipped in with 7 boundaries and 2 maximums.

Kusal Perera retired hurt just before completing his half-century. He was batting on 47 before he went off the field. Angelo Mathews and Asela Gunaratne remained unbeaten on 52 and 34, respectively to guide Sri Lanka home.

Earlier Shikhar Dhawan's 128-ball 125, his third in the tournament, went in vain in India's loss. It was his 10th ODI century. He also became the quickest to reach the 500-run mark in the Champions Trophy, achieving the feat in seven innings. Dhawan's opening partner Rohit Sharma scored his 31st ODI career half-century and also brought up 1000 runs against Sri Lanka. Their opening partnership of 138 runs was crucial in giving India a steady start.

India skipper Virat Kohli didn' trouble the scorers much as he was dismissed for a duck but Mahendra Singh Dhoni made sure that India got to a very big total. Dhoni (63) played a brilliant knock and got to his half-century in no time and giving him good company was Kedhar Jadhav who remained unbeaten on 25 off 13 balls taking India to 321 for 6 at the end of 50 overs.

Bhuvneshwar Kumar struck early with the ball as he removed Niroshan Dickwella for 7 but from there on it was all about Mendis and Gunathilaka who took Sri Lanka past the 150-run mark without any further damage. For India, none of the bowlers looked like picking up a wicket and out of the three Sri Lankan wickets to fall, two were run outs. Ravindra Jadeja went for plenty as his six overs had cost India 52 runs. Jasprit Bumrah was the most economical bowler for the defending champions as he returned with figures of none for 52 in his 10 overs.

Comments
Topics mentioned in this article
India Cricket Team Sri Lanka Cricket Team Kusal Mendis Kusal Perera ICC Champions Trophy 2017 Cricket
Get the latest updates on SA vs IND 2021-22, check out the Schedule and Live Score . Like us on Facebook or follow us on Twitter for more sports updates. You can also download the NDTV Cricket app for Android or iOS.