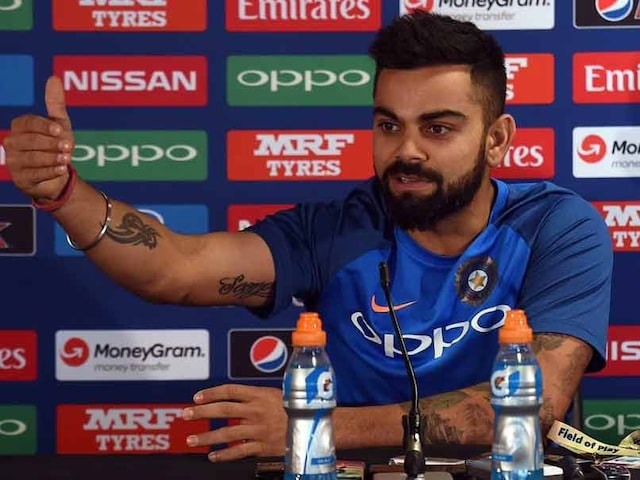 Ben Stokes hit a career-best 102 not out and captain Eoin Morgan 87 as England knocked Australia out of the Champions Trophy with a 40-run win over their arch-rivals at Edgbaston on Saturday. Stokes's third one-day international century was his highest score at this level after the all-rounder had twice made 101. Not just England cricket fans but even India captain Virat Kohli was impressed with the left-hander's batting display. "That was a ridiculous shot by @benstokes38 off Cummins. One of the best shots I've seen for a while!," tweeted Kohli after Stokes played a marvelous stroke.

That was a ridiculous shot by @benstokes38 off Cummins. One of the best shots I've seen for a while!??

While most of Kohli's followers agreed, there was one rather interesting reply to the stylish-right hander's tweet. Matthew Selt, an English professional snooker player, surprised the stylish right-hander's fans with this remark.

You could've played that shot blindfolded Virat... you are the Daddy!!! ??

Selt went on to add that he loved cricket.

I never knew matthew you are a cricket fan too! ..
-Fan from India!

Kohli got out on a duck versus Sri Lanka, edging the ball outside the off stump and, of late, has encountered technical problems in that area and perhaps that's one of the reasons he opted for throwdowns against red 'duke' ball, an effort to counter swing as he trained for the must-win contest against South Africa. It was an out of the box training session for Kohli, who walked first into the nets on Saturday.

Comments
Topics mentioned in this article
India Cricket Team Virat Kohli Ben Stokes Cricket ICC Champions Trophy 2017
Get the latest Cricket news, check out the India cricket schedule, Cricket live score . Like us on Facebook or follow us on Twitter for more sports updates. You can also download the NDTV Cricket app for Android or iOS.