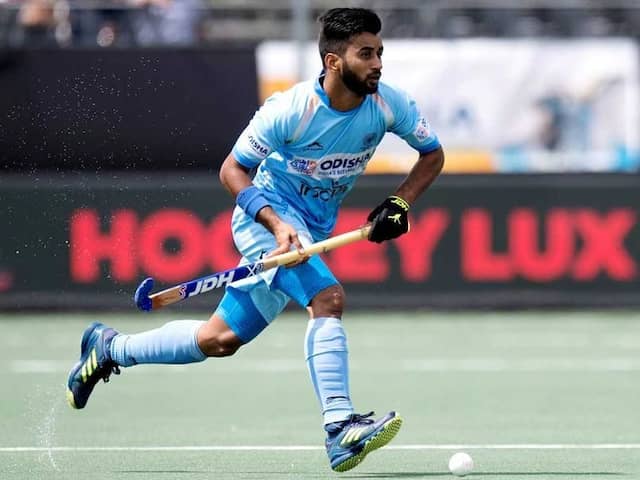 Captain Manpreet Singh led from the front as India registered an easy 3-1 win against arch-rivals Pakistan in the second match of the Asian Hockey Champions Trophy 2018 match on Saturday. India did not have a great start to the match as Pakistan forced a goal in the opening minute of the match through a penalty corner. Pakistan looked a superior side in the first quarter of the game as India struggled to penetrate the Pakistan defence. However, a moment of inspiration from Manpreet in the second quarter of the game saw India equalise 1-1 against Pakistan. The match was evenly poised at the end of the first half as both the teams were looking to extend the goal.

Mandeep Singh's cheeky goal in the 33rd minute of the game doubled India's lead in the game. The Indian side started to look more confident as they made repeated attacks in search of a third. Mandeep was creating a problem for Pakistan with his cheeky and threatening runs down the middle but Pakistan did well to hold him off. Pakistan got a penalty corner in the third quarter but failed to capitalise as the India defence stood tall. Young Dilpreet Singh found his fourth goal of the tournament to not only extend India's lead but also ensure a win. Captain Manpreet was adjudged as the man of the match. India next play Japan on October 21.

00:15 IST: And it is over! India beat Pakistan 3-1 to register their second win of the tournament.

FT| A commendable effort by the Indian Men's Hockey Team saw them beat arch-rivals Pakistan by a goal margin of 3-1, in spite of trailing in the first quarter in this blockbuster clash of the Hero Asian Champions Trophy 2018 on 20th October.#IndiaKaGame #HeroACT2018 #INDvPAK pic.twitter.com/g7sq5mGmVX

00:00 IST: It seems India are inching closer to their second win of the tournament. Less than four minutes of play left in the game.

23:55 IST: 10 minutes of left play in the match. Can India hold on to their lead or will Pakistan claw their way back in the game.

50' The clock ticks down and India maintain their lead with ease and march towards their second victory in this tournament.

23:44 IST: GOAL!! Dilpreet Singh gives India a 2-goal lead against Pakistan in the 42nd minute of the game.

42' GOAL! Lalit finds Dilpreet with a fine pass and the youngster makes no mistake to find the back of the net. He gets his 4th goal of the tournament.

23:42 IST: Pakistan get a penalty corner and they fail to capitalise. India still hold the lead. Manpreet Singh makes a brilliant pass on the counter but Mandeep Singh fails to control the ball.

23:40 IST: India are trying hard to take a 2-goal lead but the Pakistan defence is standing tall and strong. Mandeep Singh, on the other hand, is making threatening runs down the middle.

23:32 IST: GOAL! Mandeep Singh gives India a 2-1 lead against Pakistan. A brilliant display of skills from the Indian. Akashdeep makes a run down the left flank and finds Mandeep in the middle. Mandeep turns and plays a cheeky shot to find the back of the Pakistan goal.

23:19 IST: Pakistan fail to convert the penalty corner as the second quarter comes to a close. Pakistan 1-1 India at end of the first half.

23:15 IST: Pakistan defenders have their eyes on India captain Manpreet Singh, who is trying to enter the Pakistan 23-metre area from the centre-field. Pakistan 1-1 India.

23:10 IST: GOAL! Manpreet Singh equalises for India in the second quarter. The ball was flicked towards the left of the Pakistan goalkeeper, straight into the goal. Pakistan 1-1 India.

23:08 IST: India look to make inroads but nothing clicks yet.

23:02 IST: The second quarter gets underway.

22:59 IST: India try to equalise in the dying minutes of the first quarters. Pakistan still hold the edge.

22:56 IST: India are trying to enter the Pakistan 23-metre area, but the Pak defence is too good.

22:50 IST:  But India maintain the possession of the ball. Without much of a counter-attack from Pakistan.

22:49 IST: Another penalty corner for India!

22:48 IST: The first quarter has been exciting. As India get a penalty corner.

22:45 IST: It is a difficult start for India. First shot at the goal by Akashdeep Singh goes wide!

22:41 IST: The match gets underway as Pakistan try to attack right from the word go.

22:27 IST: India's playing XI is here. Take a look at the XI led by Manpreet Singh

Here's a look at the 11 players of the Indian Men's Hockey Team who will take on Pakistan in their 2nd match of the Hero Asian Champions Trophy 2018 on 20th October. Catch the action LIVE on @StarSportsIndia Sports 2/2HD from 10:40 PM (IST).#IndiaKaGame #HeroACT2018 #INDvPAK pic.twitter.com/Cd81h7iv79

#Throwback: Here are some photographs from the India vs Pakistan encounter at the Rabobank Hockey Men's Champions Trophy 2018, where India defeated their arch-rivals by 4-0. Predict the scoreline for today's match at the Hero Asian Champions Trophy 2018? #IndiaKaGame #INDvPAK pic.twitter.com/Mmh9YUVBxz

22:00 IST: Welcome to the live, detailed coverage of the India-Pakistan encounter.

Pakistan, on the other hand, will play their first match of the tournament against South Korea on Friday. Currently ranked 13, Muhammad Rizwan and his team will be looking forward to a winning start ahead of the crucial encounter against India. The two countries last played each other in the 2018 Asian Games bronze medal match, where India beat Pakistan 2-1. Apart from India and Pakistan, the other teams featuring in the tournament are Asian Games gold medallists Japan, Malaysia, South Korea and hosts Oman.

Comments
Topics mentioned in this article
India Pakistan Hockey Live Blogs
Get the latest Cricket news, check out the India cricket schedule, Cricket live score . Like us on Facebook or follow us on Twitter for more sports updates. You can also download the NDTV Cricket app for Android or iOS.