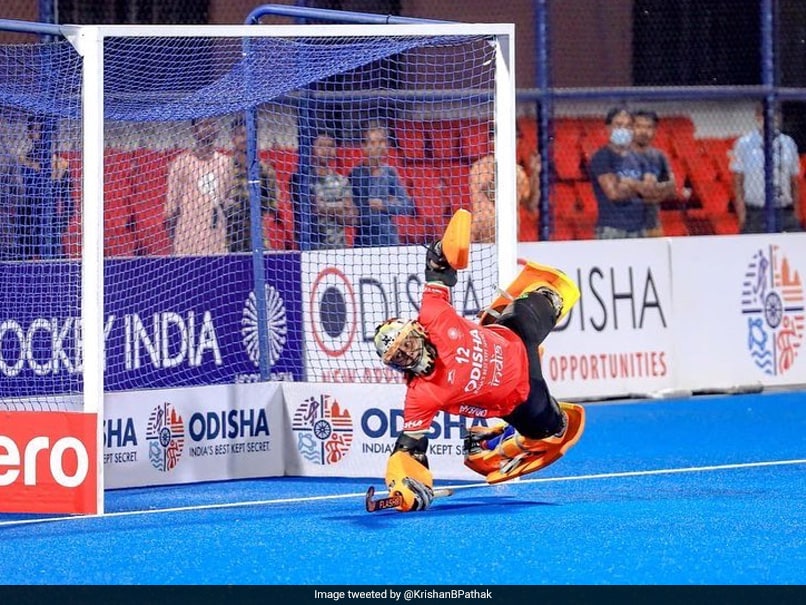 Krishan Bahadur Pathak rose to the occasion under the bar as India defeated Spain 3-1 in shoot-out after both the teams were locked 2-2 at regulation time in their second match of the FIH Pro League tie on Sunday. Harmanpreet (12th, 32nd minutes) scored a brace from penalty corners for India while skipper Marc Miralles (43rd) and Pere Amat (55th) found the net for Spain in regulation time. India had lost 2-3 against Spain in the first match of the two-leg tie.

Spain started brightly and earned a penalty corner inside the first four minutes of the match, but failed to utilise the opportunity.

India got their act together and secured their first penalty corner in the 10th minute, but Jugraj Singh's flick went inches wide of the goal.

But it took India two minutes to surge ahead when skipper Harmanpreet found the back of the Spanish net from a penalty corner earned by Shamsher Singh.

Spain made an attacking start to the second quarter, but failed to breach Manpreet Singh, who blocked a fine shot.

In the 25th minute, Manpreet conceded a penalty corner and got a green card for a reckless challenge inside their own circle, but first onrusher Rabichandra Singh did the job for the home team, blocking the try with his fearless run.

There was a flurry of chances for India but they failed to breach Spain's defence as the hosts went into the halfway break with a slender one-goal advantage.

The Indians started on an aggressive note and doubled their lead two minutes after the change of ends, again through Harmanpreet after Hardik Singh earned a penalty corner.

Harmanpreet failed to collect the ball on first try but Rajkumar did, and managed to pass it on to his skipper, who made no mistake on his second try.

India second goalkeeper Pathak was superb after the change of ends, making a couple of brilliant saves in the third quarter.

But the Indians were guilty of committing a number of unnecessary fouls, resulting in cards for the hosts.

The Indian defence finally wilted under pressure when Marc Miralles scored to the left side of Pathak to reduce the gap.

The goal seemed to have spurred Spain as they continued their attacking game and secured two more penalty corners at the start of the final quarter, but Pathak kept their opponents at bay.

Five minutes from the final hooter, the Indian defence was breached again when Pere Amat scored after the ball went in following a deflection from Jugraj's foot.

Jugraj had a difficult evening against a dynamic Spainish forwardline, conceding another penalty corner in the 59th minute.

Spain put the Indian defence under relentless pressure in the final minutes of the match, resulting in back-to-back penalty corners but failed to make use of both as the match went into shoot-out.

In the shoot-out Harmanpreet, Rajkumar Pal and Abhishek scored for India, while Pathak made excellent saves to deny Joaquin Menini, Rafael Vilallonga and Miralles to hand India the bonus point.

Only Gerard Clapes found the net for Spain from the one-on-one situation.

After Defeat Against Poland, Saudi Arabia Fans Are Supporting Their Team In This Fashion
Comments
Topics mentioned in this article

India Hockey
Get the latest updates on Fifa Worldcup 2022 and check out  Fifa World Cup Schedule, Stats and Live Cricket Score. Like us on Facebook or follow us on Twitter for more sports updates. You can also download the NDTV Cricket app for Android or iOS.