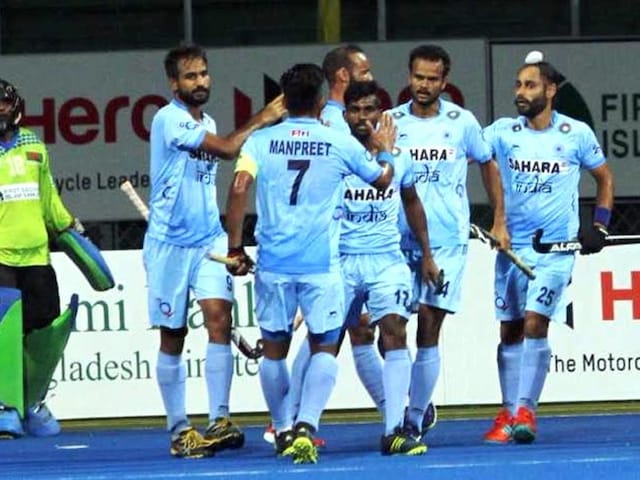 Dominant India beat first time finalists Malaysia 2-1 in a thrilling finale to win the 2017 Asia Cup Hockey tournament held in Dhaka, Bangladesh on Sunday. This was India's third continental title. Ramandeep Singh scored the opening goal in the third minute while Lalit Upadhyay extended India's lead in the 29th minute of the game. The Malaysian strikers despite continuous penetrations could not find the back of the net. Shahril Saabah scored a late goal for his side in the 50th minute to give them some hope. However, India managed to hold on to their lead to deny Malaysia their first Asia Cup title. Lalit Upapdhyay won the goal of the match award while Akashdeep Singh was adjudged the Man of the match.

18:45 IST: Thank you for joining us for the live blog. Do follow us for live updates of Men's Hockey World League Final which will be held in Bhubaneswar, India in December.

18:40 IST: The hooter goes and India are the champions of Asia for the third time!! Malaysia threw everything they had at India but the latter proved a tough nut to crack.

18:38 IST: MISS! This miss sums it up for the Malaysian side as India look for their 3rd Asia Cup.

18:35 IST: With few minutes left in the game, Malaysia are looking for equaliser with multiple penetration and interceptions.

18:31 IST: Malaysia gets a penalty corner and the Indian defence was a tough nut to crack.

18:28 IST: Six minutes left in the game. Can India hold on to win their third Asia Cup trophy or Malaysia will pull off an upset?

Malaysia back into the game with a FG from Shahril Saabah.#HeroAsiaCup #INDvMAS

18:18 IST: Early in the fourth quarter, Malaysia get a penalty corner. Faizal fires the ball in wide of the goal post. Malaysia miss out on the equaliser and India maintain two goal advantage.

18:17 IST: Fourth and final quarter begins. India's two goal advantage should take them over the line.

18:16 IST: India still lead the game 2-0 against Malaysia at the end of the third quarter.

Just 15 minutes to go on the clock for India to get their hands on the #HeroAsiaCup title.#INDvMAS

18:11 IST: The Malaysian defence is being kept on it's toes as India are continuously attacking.

18:09 IST: India are continuously penetrating the inner circle but the Malaysian defence is standing tall.

18:04 IST: Ramandeep penetrates the D and hits the ball with full force, Gurjant collects the ball, turns and hits but misses the target.

18:00 IST: Welcome back! Ramandeep starts the proceedings for the third quarter.

17:51 IST: India are running away with the game. India are 2-0 up against Malaysia at the end of the second quarter.

HT! A fantastic 1st half for India as they have a two-goal cushion heading into the break.#HeroAsiaCup #INDvMAS pic.twitter.com/jIcsqBEqhG

17:44 IST: India get yet another penalty corner and this time SK Uthappa pushes the ball in but the Indian striker fails to convert, again. The Malaysian defence was standing tall.

17:39 IST: India get a penalty corner. Ramandeep passes the ball and Manpreet fails to find the back of the net.

17:36 IST: Miss! A brilliant long ball into the India goalpost but the Malaysian striker present at the far post fails to deflect the ball into the goal.

17:35 IST: Malaysia continue to attack in the second quarter but without any effect as the Indian defence is keeping the ball at bay with ease.

A bright start to the match by India. Who will go into HT with the lead?#HeroAsiaCup #INDvMAS

17:27 IST: Malaysia get a penalty corner and they fail to convert it into a goal. India still lead.

17:26 IST: Malaysia are keeping India on their toes with multiple penetrations.

17:20 IST: Malaysia is keeping the pressure on but India still have most of the possession.

The early goal has given India the charge in this match.#HeroAsiaCup #INDvMAS

17:14 IST: GOAL!! Brilliant ball in from the right flank from SV Sunil as Ramandeep guides the ball in the second attempt. India 1-0 Malaysia.

17:12 IST: India are on an attacking mode, two penetration in the first two minutes.

​17:10 IST: Referee blows the whistle and Malaysia start with the proceedings.

17:05 IST: Both teams are on the ground, national anthem for the respective teams is being played.

Here's Team India's XI for the grand finale vs Malaysia in the #HeroAsiaCup 2017 (Men) on 22nd Oct. #INDvMAS

16:15 IST: Ahead of the summit clash, let us take a look at the highlights of India's last match against Pakistan.

16:10 IST: Hello and welcome to the live blog of the final match between India and Malaysia of the Hero Asia Cup hockey match.

It was only in the third quarter that the Indians looked like a far more convincing unit as Satbir Singh gave India the lead in the 39th minute. What followed next was a great show by the Indians as the Pakistani defence fell apart conceding as many as four goals in the last two quarters of the match.

This is for the seventh time that India made it to the Asia Cup final. It was India's fourth win over Pakistan this year, having beaten them twice in the Hockey World League Semi-finals in London and once in the pool stages.

Comments
Topics mentioned in this article
India Malaysia Live Blogs Hockey
Get the latest Cricket news, check out the India cricket schedule, Cricket live score . Like us on Facebook or follow us on Twitter for more sports updates. You can also download the NDTV Cricket app for Android or iOS.