India vs Pakistan, Asia Cup Hockey 2017 Highlights: India continued their unbeaten run in the tournament by defeating Pakistan 4-0 to enter the final. 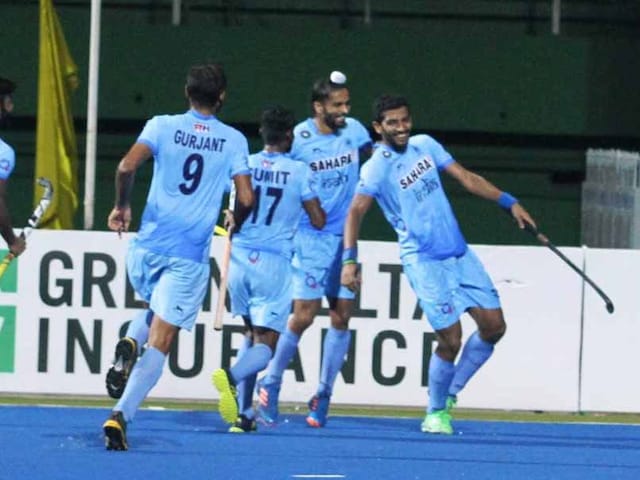 India continued their unbeaten run in the Hero Asia Cup Hockey match 2017 as they thrashed Pakistan, yet again in the tournament, to advance to the final. Pakistan in the first two quarters were the better team as they enjoyed the lion's share of the possession along with repeated inner circle penetration. However, India bounced back in the third quarter to regain possession and score four goals. Satbir Singh (39th minute), Harmanpreet Singh (51st minute PC), Lalit Upadhyay (52nd minute) and Gurjant Singh (57th minute) were the goal scorers for India.

20:15 IST: Thank you for joining us for the live blog. Do tune back in tomorrow when India will play the final.

20:12 IST: There goes the hooter! India have done it, they advance to the final of Hero Asia Cup Hockey Match 2017. Brilliant display of skills from the Manpreet-led team.

20:05 IST: Five minutes left in the game. Can India score any more goals?

20:03 IST: GOAL!!! India are running away with the game, Lalit Upadhyay scores the third for India.

52' GOAL! It's a double strike for Team India as @lalithockey puts the Men in Blue in total control.
#INDvPAK #HeroAsiaCup

51' GOALLL! @13harmanpreet makes no mistake to convert the PC with power and precision.
#INDvPAK #HeroAsiaCup pic.twitter.com/U5oFynSQFv

19:57 IST: India are attacking the Pakistan defence quite often now as they get a penalty corner.

19:54 IST: India get a penalty quarter and Varun fires the ball in the bottom left corner, Amjad Ali deflects the ball away with ease.

19:48 IST: Brilliant ball in from the left flank by Manpreet, Lalit just in front of the goal fails to connect.

19:45 IST: Good save from the Pakistan goalkeeper denies India an extended lead.

19:44 IST: India get a penalty corner, can they extend their lead?

19:42 IST: GOAL!! Satbir Singh gives India an important lead in the 39th minute of the game.

39' GOALLL! A great team goal by the Men the Blue as @satbirsingh025 puts India ahead.
#INDvPAK #HeroAsiaCup

19:35 IST: At the start of the third quarter, Pakistan continue with their attack.

19:22 IST: The game between India and Pakistan remain goalless at the end of second quarter. Both the teams came close to taking a lead but failed. Will India bounce back in the third and fourth quarter to book a place in the final or, will Pakistan still remain the dominant team?

19:20 IST: Harmanpreet fires the ball in with great power only to hit the goal post. The game still remain goalless.

19:18 IST: India get a penalty corner on the counter-attack. Can India break the deadlock?

19:16 IST: Pakistan get another penalty corner and yet again fail to find the back of the net.

19:14 IST: Ramandeep gets a shot at the goal but the Pakistan goal-keeper does a good job at keeping the ball at bay.

Midway into Q2 as India push forward for the opening goal of the match.
#INDvPAK #HeroAsiaCup pic.twitter.com/CN0kL22elu

19:10 IST: Pakistan is still dominating the pace of the match at the start of the second quarter; India are failing to gain momentum.

End of Q1: .
An entertaining first quarter comes to a close with the deadlock yet to be broken.#INDvPAK #HeroAsiaCup pic.twitter.com/MUS1VyQ46H

19:01 IST: India fail to find the back of the net as Harmanpreet misses.

19:00 IST: Ramandeep wins the penalty corner for India, can India take a lead?

18:58 IST: Attacking game from Pakistan and they get a penalty corner yet again, but the Indian defence is proving to be a tough nut to crack.

18:57 IST: Pakistan coach nods his head in disappointment as his team fails to convert yet again.

18:55 IST: Pakistan get another penalty corner, will they beat the goal keeper this time?

18:50 IST: Brilliant save from the Indian goal keeper Akash Chikte off the line as Pakistan fail to take an early lead.

SAVE! A brilliant stop by Akash Chikte to deny Pakistan the opening goal.
#INDvPAK #HeroAsiaCup

18:48 IST: Pakistan get a penalty corner, will they convert?

18:46 IST: India, at the moment, are keeping the lion's share of the possession.

18:41 IST: India get a penalty corner early in the game and Pakistan take a review. TV referee negates the original decision. Pakistan get a free-hit and they keep their referral.

18:35 IST: Both teams are out on the field and the national anthem for the respective nations is being played.

18:18 IST: India have four points from two games while Pakistan have one point from a draw. With the goal difference in mind, Pakistan need a big win to overtake India and book their place in the final.

18:14 IST: India have been ruthless in the whole tournament and they will be looking to continue their red-hot form against Pakistan.

18:10 IST: If India defeat Pakistan today they will be registering their 6th consecutive victory over their arch-rivals.

18:03 IST: As far as India is concerned, they need only a draw to qualify for the final.

18:00 IST: The top two teams in the Super 4s tabel will qualify for the final, while the other two teams will fight for the bronze medal.

16:43 IST: Update: The match between India and Pakistan has been delayed until 18:30 IST due to rain. Stay tuned for more updates.

Update: #INDvPAK has been delayed until 6:30 PM IST due to rain. Stay tuned for further updates.

16:40 IST: Hello and welcome to the live blog of the match between India and Pakistan straight from Dhaka, Bangladesh.

Indian coach Sjoerd Marijne stated that his team will be focused on improving their performance from their previous outing where they beat Pakistan 3-1 in the pool stage. The top two teams at the end of second round will reach the final while the teams finishing third and fourth will vie for the bronze medal. Though India are on top of the table with four points from one draw and one win, Malaysia are close second with three points from their win against Pakistan. South Korea have two points from two draws and Pakistan are at fourth and last position with one point. Yet, no teams have secured a place in the final.

Comments
Topics mentioned in this article
India Pakistan Hockey Live Blogs
Get the latest Cricket news, check out the India cricket schedule, Cricket live score . Like us on Facebook or follow us on Twitter for more sports updates. You can also download the NDTV Cricket app for Android or iOS.