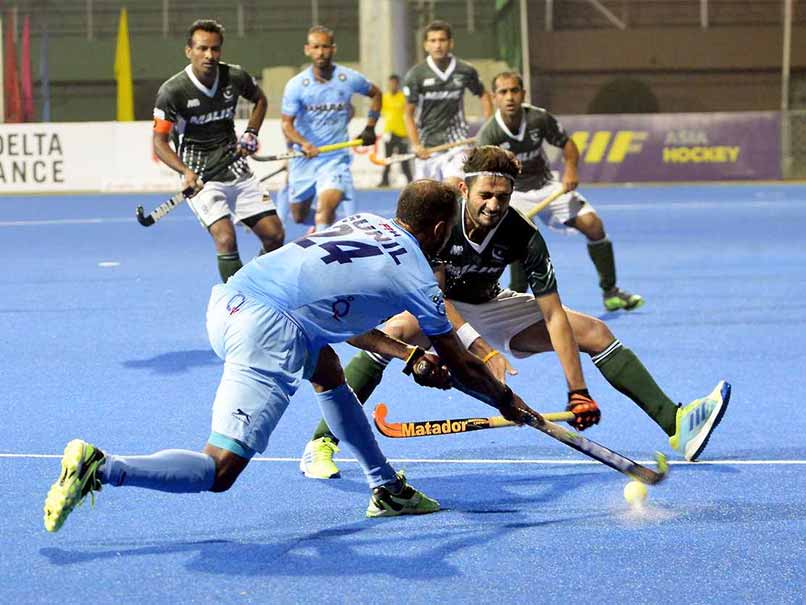 With this victory, India finished on top of Pool A with nine points in three matches.© Hockey India

India continued their brilliant form in the Asia Cup Hockey 2017 tournament as the Men In Blue defeated arch-rivals Pakistan 3-1 in their Pool A match at the Maulana Bhashani National Hockey Stadium in Dhaka on Sunday. Chinglensana Singh (17th minute), Ramandeep Singh (44th minute) and Harmanpreet Singh (45th) scored for India. By virtue of this win, India finished on top of Pool A with nine points from three games while Pakistan secured the second spot with four points.

Both India and Pakistan have managed to secure their place in the round-robin Super 4 stage of the tournament.

Even though Japan defeated hosts Bangladesh 3-1 earlier in the day, the victory was not for them to enter the Super 4 stage as they lost out to Pakistan on goal difference.

India will now move into the second round of Super 4s where the top teams from both the pool will play in round-robin format before the knockouts.

Pakistan, with four points, also advanced to the second round.

India had defeated Japan 5-1 in their opening match and then mauled minnows Bangladesh 7-0 in their second encounter of the tournament.

The Indians came out hard in the second quarter and took the lead in the 17th minute through Chinglesnsana. He slammed the goal after receiving a fine pass from Akashdeep Singh.

After wasting another penalty corner, Pakistan were denied by young India goalkeeper Suraj Karkera, who saved Mohammed Attiq's shot from close range as India went into the breather leading by a goal.

India replaced Karkera with Akash Chikte in the goal at the halfway mark and the young custodian came up with a superb save in the 40th minute to deny Pakistan.

Soon Gurjant had a great chance to consolidate India's lead but his push, after a fine one-two with Akashdeep was saved by the Pakistani goalkeeper.

After Pakistan wasted their third penalty corner, Ramandeep doubled India's lead in the 44th minute with a neat deflection off Harmanpreet Singh's fantastic cross from the middle of the pitch.

India extended their lead in the very next minute from their second penalty corner through Harmanpreet.

Pakistan, who looked more purposeful in the fourth and final quarter, reduced the margin in the 49th minute through Shan's field strike.

Chikte once again came to India's rescue soon, when he denied Pakistan with a fine save from their fourth penalty corner.

Thereafter, India pressed hard and earned as many as three penalty corners in succession but wasted all.

Comments
Topics mentioned in this article
India Pakistan Hockey
Get the latest updates on IPL 2021, IPL Points Table , IPL Schedule 2021 , live score . Like us on Facebook or follow us on Twitter for more sports updates. You can also download the NDTV Cricket app for Android or iOS.