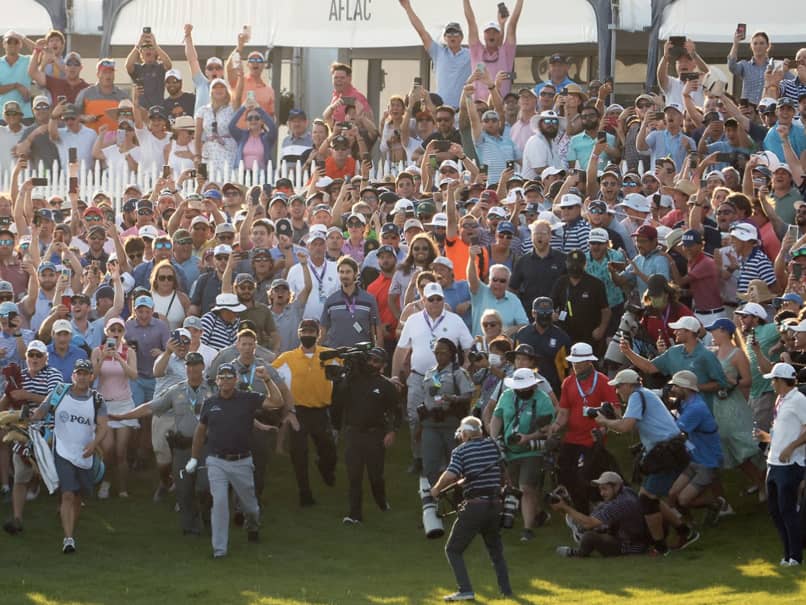 PGA chief executive Seth Waugh apologized Monday after the raucous crowd scenes that marked the climax of Phil Mickelson's PGA Championship victory at Kiawah Island the day before. In a statement, Waugh said the PGA had apologized to both Mickelson and Brooks Koepka after they were mobbed by fans as they headed up the 18th fairway on the Ocean Course. Mickelson later described the chaotic scenes as "unnerving but incredible," but Koepka was unimpressed after complaining of being "dinged" by spectators.

"It would have been cool if I didn't have a knee injury and got dinged a few times in the knee in that crowd because no one cared," Koepka said.

"It's cool for Phil but getting dinged a few times isn't exactly my idea of fun," Koepka added.

Waugh said Monday that tournament security had been "overwhelmed" by the rush of spectators cheering the 50-year-old Mickelson as he headed towards becoming the oldest major winner in history.

"While we welcome enthusiastic fan engagement, we regret that a moment of high elation and pent-up emotion by spectators during the conclusion of yesterday's historic PGA Championship briefly overwhelmed security and made two players and their caddies feel vulnerable," Waugh said in a statement.

"We always put player safety at the top of our list and are grateful order was restored. I have spoken to both players and apologized on behalf of the Association," Waugh concluded.

Comments
Topics mentioned in this article
Phil Mickelson Golf
Get the latest updates on IPL 2021, IPL Points Table , IPL Schedule 2021 , live score . Like us on Facebook or follow us on Twitter for more sports updates. You can also download the NDTV Cricket app for Android or iOS.