Phil Mickelson became the oldest major winner in golf history, the 50-year-old left-hander capturing the PGA Championship by two strokes for his sixth and most iconic major title. 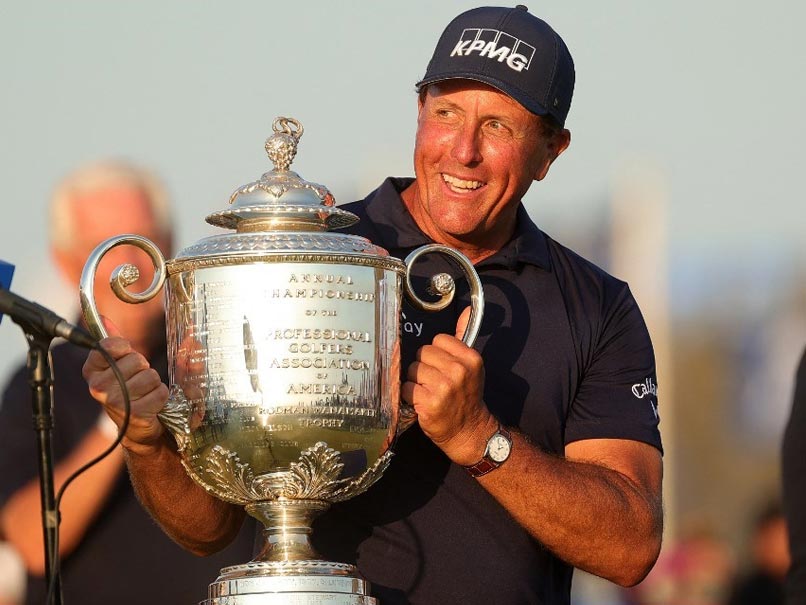 Phil Mickelson took the USD 2.1 million top prize with an epic victory for the ages.© AFP

Phil Mickelson became the oldest major winner in golf history on Sunday, the 50-year-old left-hander capturing the PGA Championship by two strokes for his sixth and most iconic major title. The age-defying American took the $2.1 million (1.7 million euro) top prize with an epic victory for the ages, producing a dazzling shotmaking display at windy Kiawah Island's while younger rivals faded. "It has been an incredible day," Mickelson said. "Certainly one of the moments I'll cherish my entire life." Mickelson erased the major age win mark set by American Julius Boros when he captured the 1968 PGA Championship at age 48.

"I don't know how to describe the feeling of excitement and fulfillment and accomplishment to do something of this magnitude when very few people thought that I could," Mickelson said.

It was the first major victory for Mickelson since the 2013 British Open.

"This is just an incredible feeling because I believed that it was possible but yet everything was saying it wasn't," Mickelson said. "I hope others find that inspirational."

Tiger Woods, a 15-time major winner and long-time Mickelson rival, did, tweeting: "Truly inspirational to see @PhilMickelson do it again at 50 years of age. Congrats!!!!!!!"

Spectators created a surreal scene at the 18th hole, swarming around Mickelson after his second shot as he tried to walk to the 18th green, needing to three-putt from 16 feet for the epic triumph.

Outnumbered security guards forced Mickelson through a throng of thousands of people who encircled the green chanting "Lefty, Lefty," and roared with delight as he tapped in for par to complete a victory for the ages.

"I don't think I've ever had an experience like that, so thank you for that," Mickelson told the crowd as he accepted the Wanamaker Trophy.

The crowd, limited to 10,000 people by Covid-19 safety measures, roared with every successful swing by Mickelson, creating an electric atmosphere all day on the punishing Ocean Course, the longest layout in major history at 7,876 yards.

On the front nine, Mickelson answered three bogeys with three birdies in a roller-coaster start, his most astonishing effort a 50-foot chip-in from the sand at the par-3 sixth, for a two-stroke lead at the turn.

World number 115 Mickelson sank a 12-foot birdie putt at the 10th while Koepka and Oosthuizen made bogeys to leave "Lefty" with a four-stroke edge.

Koepka fell back with three bogeys in the first four holes on the back nine. When Oosthuizen made double bogey at the 13th, Mickelson owned a five-stroke lead with six holes remaining.

Mickelson found water at the 13th and made bogey on Sunday's hardest hole, then missed a seven-foot par putt at the par-3 14th for a bogey that increased the tension, leaving Oosthuizen two adrift and the week's toughest holes remaining.

But Mickelson hit his longest drive of the week, 366 yards, into the 16th fairway, then went over the green, pitched within inches from the cup and tapped in for birdie to restore his three-stroke edge.

Mickelson took a bogey at 17 and drove left at 18 near a hospitality tent then put his approach on the green to spark the chaotic finish.

It was the 45th career US PGA Tour triumph, his first since 2019 at Pebble Beach.

With 16 years between PGA Championship triumphs, Mickelson owns the longest gap between wins at the same major.

Koepka, fighting through pain to play after right knee surgery two months ago, won the 2018 and 2019 PGAs and could have become the first player to win the same major three times in four years since Tom Watson at the 1980, 1982 and 1983 British Opens.

American Jordan Spieth, trying to win to complete a career Grand Slam, closed on 74 to finish on 290.

Comments
Topics mentioned in this article
Phil Mickelson Brooks Koepka Golf
Get the latest updates on SA vs IND 2021-22, check out the Schedule and Live Score . Like us on Facebook or follow us on Twitter for more sports updates. You can also download the NDTV Cricket app for Android or iOS.