Phil Mickelson's joy at entering golf's Hall of Fame was tempered on Thursday by a level-par 71 which left him nine shots off the Singapore Open's first-round lead. 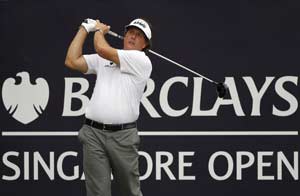 Phil Mickelson's joy at entering golf's Hall of Fame was tempered on Thursday by a level-par 71 which left him nine shots off the Singapore Open's first-round lead.

Mickelson, lobster-red from sizzling conditions on Sentosa island, said it was "pretty neat" to be named alongside the sport's greats which will take place at a special ceremony later.

"That'll be fun. It's cool. Yeah, it's cool. It's pretty neat to see the names that are in there, to be a part of that. That's a pretty cool honour," said the four-time major-winner.

But Mickelson, 41, was perplexed by his patchy form following a six-week break, during which time he dropped out of the world top 10 for the first time in seven years.

The American hit four birdies alongside two bogeys and a double-bogey on the par-four 11th on the Tanjong course, considered the easier of the Singapore Open's dual lay-outs.

"The course was in great shape but I didn't play the best," said Mickelson, currently ranked 11th.

"So I don't know if I have a real purpose other than try to shoot a lower round and maybe play the Serapong course maybe a bit more strategic, a bit better."

Edoardo Molinari, of Italy, and England's James Morrison were the early clubhouse leaders after shooting scores of 62 - nine-under-par.

Mickelson will become the seventh inductee this year into the Florida-based Hall of Fame, which has more than 130 members including Ben Hogan, Ernie Els and Seve Ballesteros.

Comments
Topics mentioned in this article
Golf Phil Mickelson Saina Nehwal Jeev Milkha Singh Rahil Gangjee
Get the latest updates on Olympics 2020, Olympics 2020 Medal Tally, Live Cricket Score . Like us on Facebook or follow us on Twitter for more sports updates. You can also download the NDTV Cricket app for Android or iOS.