Brazilian driver Pietro Fittipaldi will make his Formula One debut in place of Romain Grosjean in the Sakhir Grand Prix. 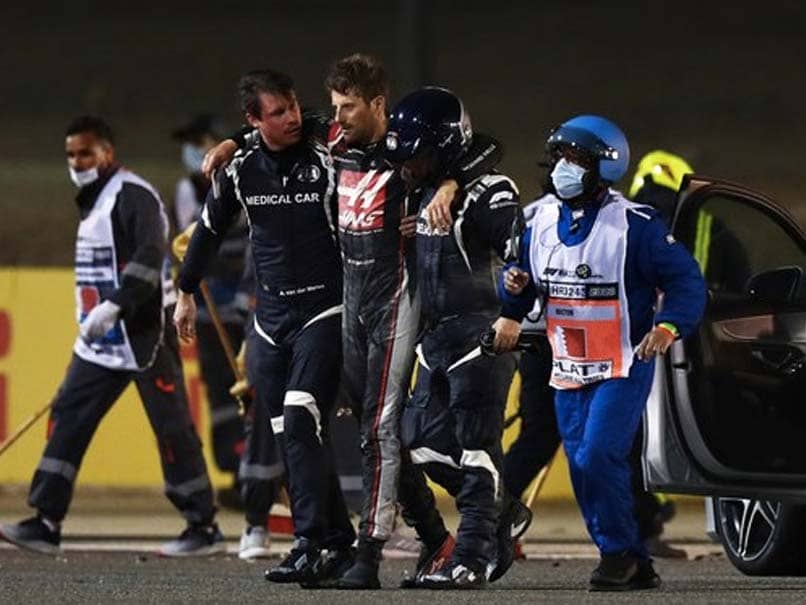 Romain Grosjean's car crashed into the barriers in the first lap of the Bahrain GP.© Twitter

French driver Romain Grosjean will sit out next weekend's Formula One race after escaping a fiery high-speed crash in the Bahrain Grand Prix with just burns to his hands, his team Haas said on Monday. Grosjean walked away from the wreckage after he collided with Daniil Kyvat's Alpha Tauri on the first lap of Sunday's race, causing the Haas car to split in half and burst into flames as it smashed through the safety barriers at 225kph. Haas said treatment for the burns that 34-year-old Grosjean suffered was "going well" and he was expected to be discharged from hospital on Tuesday.

Grosjean escaped alive thanks to the integrity of his car's survival cell, his 'halo' device, which deflected the ruptured Armco metal barriers away from his head, his own presence of mind in remaining calm as he extricated himself and the rapid skilled assistance of F1's medical staff and track marshals.

"Hello everyone, I just wanted to say I'm okay, well, sort of okay," the Frenchman said in an Instagram post. "Thank you very much for all the messages.

"I wasn't for the 'halo' some years ago, but I think it's the greatest thing we brought to Formula One and, without it, I wouldn't be able to speak to you today."

Brazilian driver Pietro Fittipaldi -- grandson of two-time world champion Emerson Fittipaldi -- will make his Formula One debut in place of Grosjean in the Sakhir Grand Prix, also in Bahrain, next Sunday.

"After it was decided that the best thing for Romain was to skip at least one race the choice was pretty easy," said team principal Guenther Steiner.

"Pietro is familiar with us and it's the right thing to do."

"We are all happy his injuries are relatively minor after such a huge accident. Obviously it's not an ideal set of circumstances to get my first opportunity."

- 'Full investigation' -
As to Grosjean's future and the final race in Abu Dhabi, Steiner said he would leave it to the driver.

This weekend's Sakhir Grand Prix is the second of three events in the sport's end of season triple-header in the Middle East, which is likely to mark the end of Grosjean's F1 career.

He and Haas team-mate Kevin Magnussen are being released by the team at the end of the year.

"It is his decision and his alone," said Steiner who visited his driver in hospital Monday.

"I will not interfere with that one. He needs to make that one up for himself. I follow his guidance there.

"I don't know how he is tomorrow when the bruises come through and maybe he thinks a little bit more about it. I don't know what someone is thinking after a thing like this.

"That is the reason why I want to give him a little bit of time to think about it, to give us feedback on what he wants to do and we go from there.

"For sure, we have always got a plan in place, but at the moment my plan would be, if he is ok, to get him back in there in the race in Bahrain next weekend, but we have to wait."

As Grosjean continued his recovery from a near-miraculous escape, F1 chiefs said a deep analysis and investigation into his crash had begun overnight with race director and safety delegate Michael Masi and F1's motor sport managing director Ross Brawn confirming the sport's intentions.

"As part of every incident that occurs, the FIA undertakes a full investigation," said Masi.

"So, even during the race, a lot of our teams started collating all of the data that was available, including video cameras with any angle that was possibly available.

"Our technical teams started taking a whole lot of photographs and understanding the car as it was returned back to the team.

"Then there will be a complete overall analysis done of everything, in very fine detail, to see what we can learn from it.

"Safety is ever evolving, ever improving. You can learn from everything."

Romain Grosjean Bahrain Grand Prix
Get the latest updates on India vs Australia Series, check out the India vs Australia Schedule for 2020-21 and Ind vs Aus live score . Like us on Facebook or follow us on Twitter for more sports updates. You can also download the NDTV Cricket app for Android or iOS.