Max Verstappen won by nearly 13 seconds from Hamilton to embellish what has been a tough season after he failed to finish seven races and only once reached the podium. 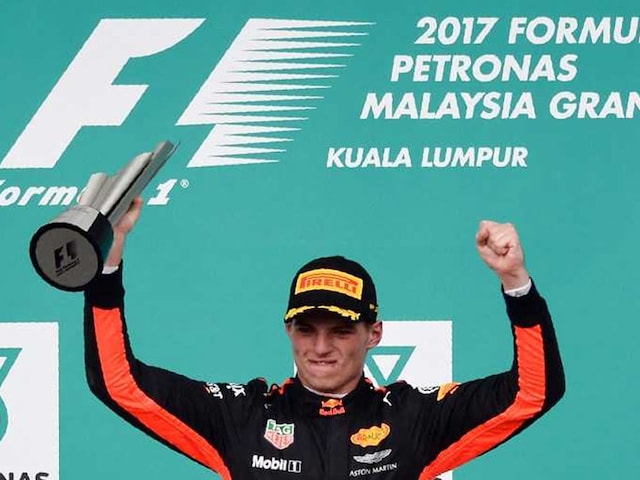 Max Verstappen celebrates on the podium after winning the Malaysian Grand Prix.© AFP

Red Bull's Max Verstappen won the final running of the Malaysian Grand Prix on Sunday as Mercedes' Lewis Hamilton finished second to extend his championship lead over Sebastian Vettel to 34 points. Verstappen, who celebrated his 20th birthday a day earlier, overtook pole-sitter Hamilton on lap four before clinching the second victory of his career and first this season. Mercedes driver Hamilton finished second with Red Bull's Daniel Ricciardo third and Vettel, who started at the back of the grid, fourth.

With five races to go, Hamilton is edging ever closer to the title but Ferrari had a weekend to forget, after Kimi Raikkonen didn't even make the starting grid and Vettel lost a rear wheel in a bizarre smash after the finish line.

Verstappen won by nearly 13 seconds from Hamilton to embellish what has been a tough season after he failed to finish seven races and only once reached the podium.

"The car was unbelievable, if I had to speed up I could. It was a very tough race and incredible to win," said the Dutchman.

Hamilton admitted the Mercedes had been second-best.

"Big congratulations to Max and happy birthday, he did a fantastic job today," he said.

"The race was a tough one, obviously they just had the upper hand on us today... I feel good but I think we have some work to do with the car. Obviously we didn't have the pace this weekend."

Verstappen's Red Bull team-mate Ricciardo fought off a strong challenge from Vettel, who had started from the back following engine problems in qualifying.

"Seb came really quick at the end and I thought he was going to be a handful," said Ricciardo. "But he only had one strong attack and then we were able to pull away."

Ferrari's fortunes had dimmed when Kimi Raikkonen's car suffered a turbo failure before the start.

He was pushed back to the pit and the race was over before it had even begun for the former world champion, who had enjoyed his maiden win at Sepang in 2003.

'We ran out of tyres'

"Obviously we had some issue. I don't think any of us know what it is exactly. I'm pretty certain I would have had a very good car today," a disappointed Raikkonen told reporters.

Vettel, who led the championship until just a month ago, now has only five races left to overhaul Hamilton's big lead, starting next week in Japan.

"I think we have a very good car. If we start ahead, we win the race," he said. "We had a little bit of sniff at the podium but unfortunately we ran out of tyres."

Once past Hamilton, Verstappen started to pull away and by lap 14 he had a seven-second cushion.

Vettel was picking off the back markers with ease courtesy of his second new engine of the weekend, and emerged in fourth in front of Mercedes' Valtteri Bottas after they both pitted for new tyres.

Vettel made one daring attempt to grab the last podium spot up the inside of Ricciardo at the end of the pit straight with seven laps to go.

But the Australian closed him off and Vettel was forced to drop back and settle for fourth as his front tyres started to degrade.

The drama didn't end there as on his slow-down lap, Vettel collided with the Williams of Lance Stroll which left his Ferrari with one rear wheel on top of his car.

"That's impossible," Vettel thundered over the radio. "Stroll wasn't looking where he was going!"

It was the 19th and last Malaysian Grand Prix at steamy Sepang.

The race will disappear from the calendar after Malaysia's government decided it would no longer cover the USD 67 million a year cost of staging the loss-making event.

Comments
Topics mentioned in this article
Red Bull Mercedes Ferrari Max Verstappen Lewis Hamilton Daniel Ricciardo Sebastian Vettel Malaysian Grand Prix
Get the latest Cricket news, check out the India cricket schedule, Cricket live score . Like us on Facebook or follow us on Twitter for more sports updates. You can also download the NDTV Cricket app for Android or iOS.