It was Sebastian Vettel's, four-time world champion fourth win for Ferrari and his first since Singapore in 2015 and his 43rd career win. 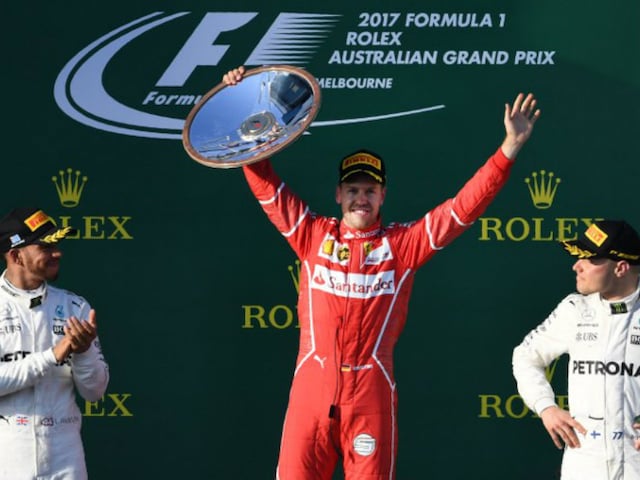 Sebastian Vettel out-manoeuvred Lewis Hamilton and the world champion Mercedes team with a stunning victory in the season-opening Australian Formula One Grand Prix in Melbourne on Sunday. Vettel won by almost 10 seconds from Hamilton and Mercedes team-mate Valtteri Bottas in a commanding victory of tactics and speed around the Albert Street circuit. It was Ferrari's first win in Melbourne since Kimi Raikkonen's victory in 2007 and Vettel's second in Australia after winning the 2011 race with Red Bull. It was also a major fillip for the 2017 season and the new generation of quicker cars after Ferrari's superior pre-season test times as they chase their first world constructors' title since 2008.

It was the German four-time world champion's fourth win for Ferrari and his first since Singapore in 2015 and his 43rd career win.

"A title challenge is a long way ahead. For now we are just over the moon at the start we have made here today," Vettel said.

"I was not entirely happy with my start, there was a bit of wheel spin, but I was trying to keep the pressure on to give the message that we are here to fight.

"There was a bit of luck that Lewis came out in traffic."

Ferrari got the better of Mercedes in the sole round of tyre changes which ultimately decided the race.

Hamilton's early stop meant he rejoined behind the Red Bull of Max Verstappen which allowed Vettel to open up a decisive gap at the head of the field.

"A big congratulations to Ferrari and Sebastian," Hamilton said.

"In the race, I struggled with the tyres. I had to stop very early and I got stuck behind one of the Red Bulls but that's just the way it goes."

Ferrari's Kimi Raikkonen was fourth with Verstappen fifth ahead of Brazilian Felipe Massa in the Williams.

Australia's big hope Daniel Ricciardo had a heartbreaking day with gear box problems ending his race on the 29th lap after he was forced to start from pit lane when his Red Bull car broke down on the warm-up lap.

Comments
Topics mentioned in this article
Ferrari Mercedes Sebastian Vettel Lewis Hamilton Valtteri Bottas Kimi Raikkonen Australian Grand Prix Formula 1
Get the latest Cricket news, check out the India cricket schedule, Cricket live score . Like us on Facebook or follow us on Twitter for more sports updates. You can also download the NDTV Cricket app for Android or iOS.