Eifel GP: Lewis Hamilton equals Michael Schumacher's record of 91 wins in Formula One as he won the Eifel Grand Prix on Sunday. 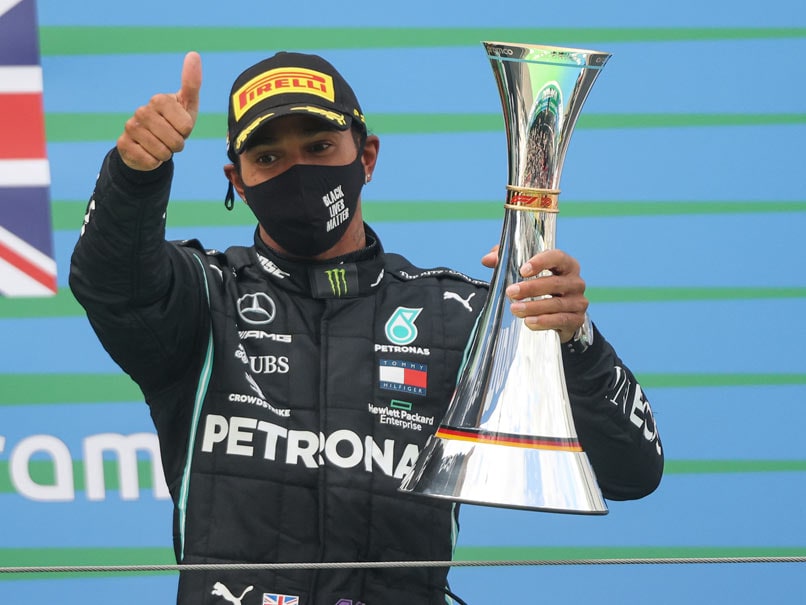 Lewis Hamilton equalled Michael Schumacher's record of 91 Formula One wins on Sunday when he guided his Mercedes to a narrow, if measured, victory at a frantic Eifel Grand Prix. Taking full advantage of team-mate and pole-sitter Valtteri Bottas' early retirement with engine problems, the runaway series leader and six-time champion drove a well-judged race to claim his seventh victory from 11 contests this year. "What a result," he said on the Mercedes team radio after taking the chequered flag clear of Max Verstappen of Red Bull with Renault's Daniel Ricciardo in third.

In a touching tribute Mick Schumacher presented Hamilton with one of his father's race helmets.

"Seeing Michael's dominance for so long I don't think anyone – especially me – could ever think of getting near Michael in terms of records," said Hamilton.

On a circuit where Germany's seven-time champion Schumacher won five times, Hamilton took his second Nurburgring victory – his previous was for McLaren in 2011.

Bottas' bad luck handed Hamilton his chance and almost certainly ended his own title bid as the Briton moved 69 points clear ahead of him in the drivers' championship.

Ricciardo's podium success meant that he had won a bet with Renault team boss Cyril Abiteboul, requiring the Frenchman to take a tattoo prescribed for him by the Australian.

For Hulkenberg, it was a remarkable result coming only 24 hours after he had jumped into the cockpit of Lance Stroll's car after a late call to action from a café in Cologne.

Romain Grosjean, with an injured finger, was ninth for Haas ahead of Antonio Giovinazzi of Alfa Romeo.

Lewis Hamilton Michael Schumacher
Get the latest updates on ICC T20 Worldcup 2022 and CWG 2022 check out the Schedule, Live Score and Medals Tally. Like us on Facebook or follow us on Twitter for more sports updates. You can also download the NDTV Cricket app for Android or iOS.