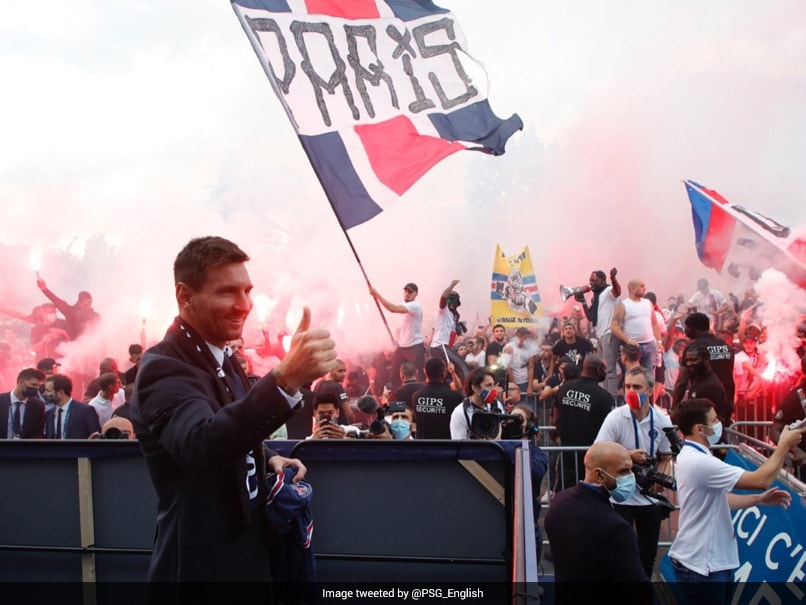 Having officially signed his contract with Paris Saint-Germain (PSG), Lionel Messi was presented by club president Nasser Al-Khelaifi to supporters at the Parc des Princes. The Ligue 1 outfit posted a short snippet of the moment on social media and it showed hysteric fans going wild in front of the former Barcelona captain. Messi also showed his new PSG jersey to the fans. Having won six Ballon d'Or awards, Messi will be joining former teammate Neymar in a side consisting of the likes of Kylian Mbappe, Angel Di Maria and Sergio Ramos. Here is the video:

Messi parted ways with Barcelona on August 5. During his farewell press conference on Sunday, he was in tears and revealed that he never wanted to leave the Catalan outfit.

"This year, my family and I were convinced we were going to stay here, at home - this is what we wanted more than anything", he said.

Club president Joan Laporta also revealed that Barcelona's financial condition made it hard for them to accommodate Messi's contract.

The 34-year-old had a below-par 2020-21 domestic football season but still finished as La Liga's top scorer with 30 goals. Since making his professional debut for the first team in 2004, he went on to win 34 trophies, scoring 672 goals and registering 288 assists.