Real Madrid defeated La Liga rivals and city neighbours Atletico Madrid in the UEFA Champions League final on Saturday night at San Siro in Milan in a repeat of the 2013-14 summit clash. This is their record 11th title while Atletico went down in the summit clash of the tournament for the third time in history. Catch all the highlights of Real Madrid vs Atletico Madrid - UEFA Champions League final here.

03:25 hrs IST: Hope you folks enjoyed our coverage. It is Good Morning from us here. 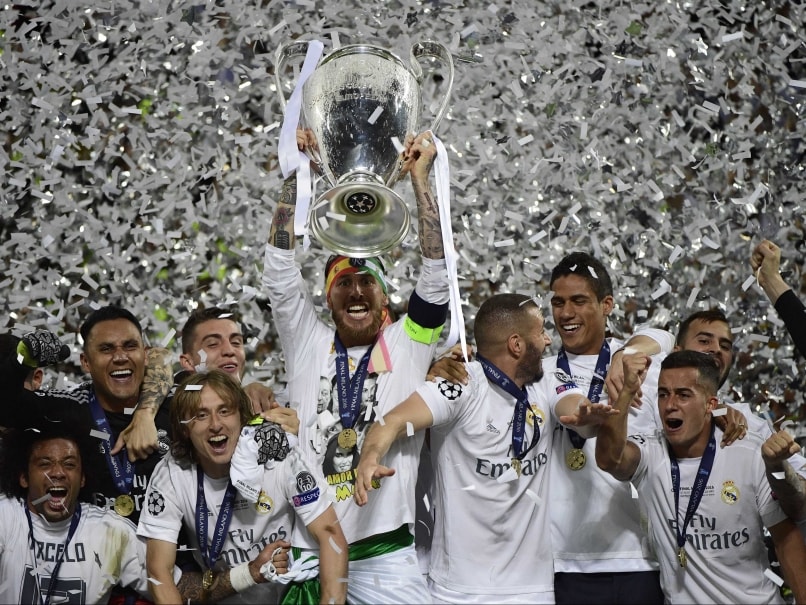 Zinedine Zidane becomes the 8th coach in history to win the competition in his debut campaign! #UCLfinal pic.twitter.com/R1Or63wrt9

03:18 hrs IST: The most prestigious title in European football.

A familiar name is going on the #UCL trophy...#UCLfinal pic.twitter.com/S5tNIWq7MP

03:11 hrs IST: And poor Diego Simeone. His team has gone down twice at the same stage in three years. What a heartbreak.

03:08 hrs IST: What a night and what an end! While Atletico players are crying, the champions are celebrating with their family members on the pitch.

03:06 hrs IST: Next up is Ronaldo for Real Madrid and he scoreesssssssssssssssss! REAL MADRID HAVE WON THE CHAMPIONS LEAGUE THE 11TH TIME! SECOND TIME IN THREE YEARS!

02:57 hrs IST: The teams are deciding who are going to take penalties.

02:55 hrs IST: Simeone is livid. Shouting to the Atletico supporters to keep up the noise levels!

02:52 hrs IST: Desperate attempts by Real Madrid but Atletico are cautious there.

02:48 hrs IST: Someone is down on the ground, cramping up. It is Koke. And immediate substitution. In comes Partey!

02:47 hrs IST: Oh my the two teams are indulging in an argument. Ramos leading the charge for Real.

02:45 hrs IST: It has definitely been a brilliant performance by Oblak tonight.

02:43 hrs IST: Another yellow! This time for Pepe, who escaped a few times earlier this night, for a poor tackle on Atletico's Gabi.

02:41 hrs IST: Hernandez, 20, comes in for Filipe Luis, who was down on the pitch, for Atletico Madrid. This is their second substitution of the night.

02:37 hrs IST: Guess it will not satisfy the fans of the two teams.

.@ChampionsLeague So happy it will be 1 of our teams. It doesn't matter, it's a huge success of Spanish football...What do you guys think?

02:35 hrs IST: Bale is receiving some treatment. He was cramping some time back.

02:32 hrs IST: Real Madrid hold possession at present. They got a couple of chances but the Atletico defence is strong.

02:31 hrs IST: Just three minutes left in the first half of extra time. Are we going into penalties!

02:29 hrs IST: Another couple of lovely chances for Griezmann but not resulting in anything.

02:23 hrs IST: Even the great Antonio Banderas is watching this epic final.

02:16 hrs IST: Two years ago, Atletico were leading 1-0 when Real equalised in injury time to take the match into extra time. Real then scored three more to clinch the Champions League title. What will happen tonight?

02:14 hrs IST: And regulation period is over. We are heading into extra time. What a comeback by Atletico Madrid!

02:09 hrs IST: Regulation period about to come to an end here!

02:07 hrs IST: Carrasco has become the first Belgian to score in an European Cup final!

Not bad at all https://t.co/9yIgRNN4Xd

02:05 hrs IST: Carrasco was brought in at the start of the second half, replacing Augusto. And what a masterful switch it was from Diego Simeone!

02:02 hrs IST: Significantly Real Madrid have used up all three substitutions while Atletico have made only one so far!

01:58 hrs IST: Shot from Ronaldoooooooooooo and it goes wide!

01:56 hrs IST: A small video of the fantastic opening ceremony before the match. Alicia Keys rocked it.

01:55 hrs IST: Real Madrid have the smoothness they had in the first half of the game and Atletico are attacking more and more.

01:52 hrs IST: Toni Kroos is going off. Isco runs in as the substitute!

01:48 hrs IST: Real good chance for Benzema!!!! And he shoots right into the Atletico Madrid keeper. Chance missed to take a 2-0 lead.

01:46 hrs IST: Lovely pass there from Benzema to Marcelo. Real are building for another one, are they?

01:44 hrs IST: Antoine Griezmann is the first player to miss a penalty in the Champions League final since Arjen Robben in 2012. 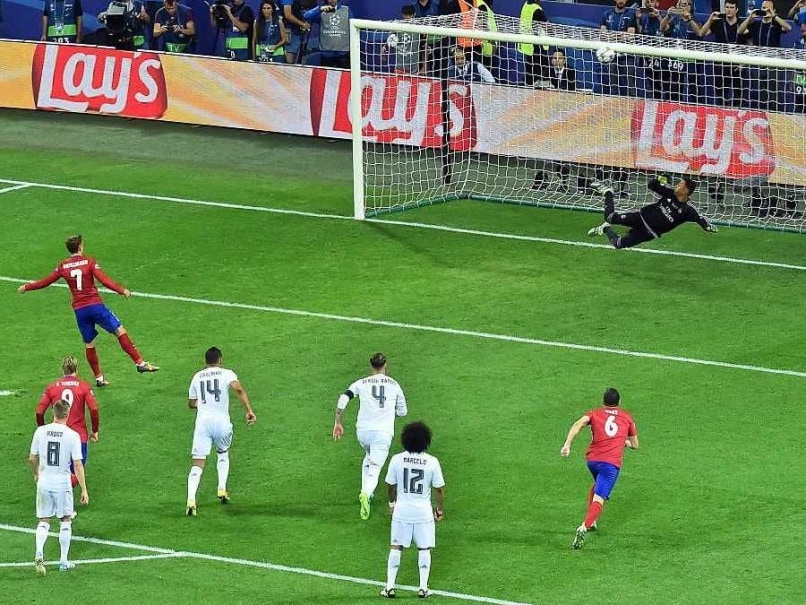 Antoine Griezmann missed a crucial penalty at the start of the second half. (Image credit: Champions League/Twitter)

01:40 hrs IST: This looks like a different Atletico side in the second half. Much more aggressive and attacking. But they are lacking in finishing. They need that last touch.

Chance! A clever effort by @Koke6, volleying a bouncing ball from the right corner of the box, almost finding the top-right corner #UCLfinal

01:36 hrs IST: The most crucial miss of the tournament perhaps.

01:33 hrs IST: Real Madrid full-back Daniel Carvajal is substituted by Danilo. He is in tears. But why?

01:32 hrs IST: In the midst of all this, Real Madrid goalkeeper Keylor Navas was given the second yellow of the match for delaying the penalty.

01:26 hrs IST: Tackle by Pepe on Torres inside the box and the referee immediately pointed to the box!

01:25 hrs IST: Penalty! In the first minute of play in the second half!

01:24 hrs IST: Does this make their chance stronger?

When Madrid have led at half-time in #UCL, they have lost only one in 47 matches (v Galatasaray, 2013). #UCLfinal pic.twitter.com/W0Y9qtyiRh

01:22 hrs IST: Hello people welcome back after the small break.

01:12 hrs IST: What will Simeone tell his players in the locker room during the break?

01:10 hrs IST: That Sergio Ramos goal proved to be the difference between the two sides at half-time. Real Madrid have been clearly the dominant team in the first half.

43 - CHANCE! @AntoGriezmann escapes the clutches of @Casemiro, but pulls a low shot wide of the left post. #UCLfinal pic.twitter.com/YLSCAp7juo

01:02 hrs IST: Bale has totally been in action tonight in Milan, completing most of his passes, offering good chances to his teammates.

00:55 hrs IST: Griezmann kick and..... straight into the hands of Keylor Navas in the Real Madrid goal. Atletico need to do something out of the ordinary here! Simeone up to something?

00:53 hrs IST: Ronaldo into the act... he has not had much to do tonight. But will it matter that much if Real win?

00:47 hrs IST: The game has slowed down and Real look really in command here.

00:45 hrs IST: Some big names out there to watch the match at San Siro. Catch live scores here.

00:43 hrs IST: Simeone's side has responded well after that setback in the 15th minute but Real still maintain ball possession.

00:40 hrs IST: Two years back it was also Ramos who had equalised for Real in injury time before they went on to win the CL final 4-1! Deja Vu!

00:38 hrs IST: And this is what Ramos had said just before the final.

Toni Kroos whips in a free-kick from deep, Gareth Bale flicks it on with his head, and Ramos turns it home from close range.

00:32 hrs IST: Yellow! The first of the match for Real Madrid right-back Dani Carvajal for a reckless sliding tackle on Antoine Griezmann.

00:30 hrs IST: That was a great save from Oblak! That almost went in for Real.

0-0 | 5' GREAT SAVE FROM OBLAK ON THE GOAL-LINE! The reflexes of the Slovenian save the 1-0. Spectacular! #NeverStopBelieving #UCLFinal

00:27 hrs IST: Free-kick! Ooh! That was close! Real almost went ahead in the initial minutes!

5 - Free-kick for @realmadrid right on the corner of the box! #UCLfinal

00:26 hrs IST: Bale was on the move their before being stopped by Atletico defenders!

00:25 hrs IST: Meanwhile look who else is watching the Champions League final! None other than Rohit Sharma. Rest day in the IPL today.

00:22 hrs IST: Torres pushes Pepe over and the latter rolls on to the pitch.

00:15 hrs IST: The two teams are walking out on to the hallowed pitch of San Siro which is the home of Inter Milan and AC Milan.

00:09 hrs IST: The opening ceremony is underway in the fashion capital of the world.

00:05 hrs IST: FIFA president Infantino is also out there at San Siro!

00:03 hrs IST: Wow! That is some stat and Real would want to make this day count.