It was a familiar feeling for Zenit as the Russians were also beaten in Spain on matchday one last season by Malaga, but in truth they deserved little more from a disappointing display that only sparked into life for a brief spell after half-time. 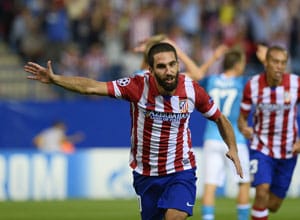 Atletico Madrid made a winning return in their first Champions League encounter for four years with a 3-1 victory over Zenit St Petersburg at the Vicente Calderon.

Brazilian defender Miranda had headed the hosts into a deserved half-time lead, but Diego Simeone's men were pegged back at the start of the second period by a wonderful strike by Hulk.

Atletico had the stroke of luck they needed 25 minutes from time though as the ball ricocheted around the Zenit area and struck Arda Turan on its way into the net.

Leo Baptistao sealed the three points with his first goal for the club 10 minutes from time.

"I was delighted with the reaction of the boys after the equaliser," Simeone told Canal Plus.

"We had clear dominance of the game in the first-half, but we didn't have many clear chances at goal.

"They then scored and had another shot against the bar, but the team clicked at that point and we got back in front.

"We could have killed the game off earlier, but the third goal sealed it and I am very happy overall."

It was a familiar feeling for Zenit as the Russians were also beaten in Spain on matchday one last season by Malaga, but in truth they deserved little more from a disappointing display that only sparked into life for a brief spell after half-time.

Atletico were without their top-scorer so far this season in Diego Costa through suspension and the Brazilian's presence was missed in the opening period as the hosts failed to make the most of their dominance in possession.

Turan and David Villa saw early efforts from range easily held by Juri Lodigin before Koke prodded wide from inside the area after good work by Mario Suarez.

Atletico's best chance of scoring looked like it was going to be from a set-piece and so it proved as they opened the scoring six minutes from half-time when Miranda rose highest to nod home Koke's corner.

Koke nearly added a second moments later with a wonderfully curling effort from fully 30 yards that drifted just wide as Atletico finished the half strongly.

However, it was roles reversed at the start of the second as after Thibaut Courtois produced a stunning save to turn Alexander Kerzhakov's header behind, Hulk fired an unstoppable effort past the Belgian from outside the area.

Hulk was desperately unlucky not to add a second to his tally moments later as he fired a free-kick off the crossbar.

Yet, the game swung back in Atletico's favour on 64 minutes as Turan put the hosts back in front in bizarre fashion when Konstantin Zyryanov smashed a clearance off the Turk's shins and the ball rebounded into the net.

Lodigin then kept the Russians in the game with a fine save from Villa's free-kick, but Leo did make the game safe for Atletico with virtually his first touch after replacing Adrian Lopez as he collected Turan's pass and curled beautifully into the far corner.

Comments
Topics mentioned in this article
Football Zenit St. Petersburg Atletico Madrid
Get the latest updates on SA vs IND 2021-22, check out the Schedule and Live Score . Like us on Facebook or follow us on Twitter for more sports updates. You can also download the NDTV Cricket app for Android or iOS.